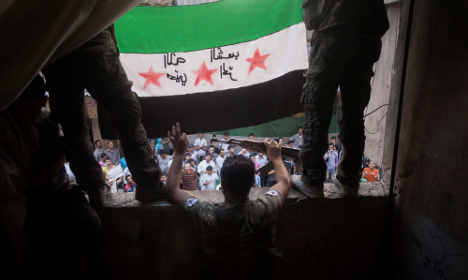 Mouhannad Droubi, 29, had become the first Syrian convicted in Sweden for crimes committed in his country's brutal conflict when a court handed him a five-year sentence in February 2015 over the filmed attack.

But the war crimes conviction was scrapped after it emerged that the victim was not a pro-regime soldier as previously thought, but a member of the rebel Free Syrian Army (FSA) like Droubi himself.

On Wednesday, the court in Huddinge near Stockholm, handed Droubi a longer sentence despite the lesser charge. It also ordered him to be deported as soon as his jail term is up and banned him from the country for life.

Droubi, who has lived in Sweden since 2013, posted the video on Facebook in 2012 to prove his FSA credentials.

The clip shows at least five men – of whom only Droubi has been identified – attacking an injured man tied to a chair with his hands and feet bound. He was beaten with a truncheon and a whip, according to court documents.

At the time of Droubi's first conviction, the court believed the victim was a regime soldier, which made the beating a violation of the Geneva Convention and thus a war crime.

But a journalist in Turkey subsequently tracked down the victim, who said he was a defected regime soldier who had joined the FSA, and that the filmed attack took place after a fight between him and fellow rebels.