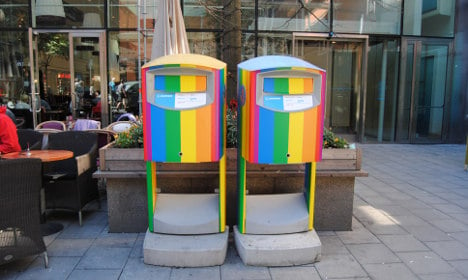 Two of the mailboxes on Regeringsgatan. Photo: PostNord

PostNord, the Swedish-Danish postal service, grabbed headlines earlier this year when The Local wrote about its move to issue what was believed to be the first official Pride flag stamp in the world.

To celebrate last week's launch of the stamp, it is once again becoming the talk of Sweden after the company repainted six mailboxes in Stockholm in the same rainbow colours, with the campaign gaining media attention on Wednesday.

“At the launch we got a lot of positive reactions, many people thought it was a fun and good thing, but I haven't actually heard a lot since then,” press officer Anne Jiremar told The Local about the reactions she had received in person following the launch.

The campaign comes at an opportune time for the famously open and tolerant nation, which on Tuesday fell from fourth to twelfth place in a key review of how gay, lesbian, bisexual or transgender people experience their human rights across Europe.

However, the company's idea behind the Pride stamp and rainbow mailboxes is not to influence official policy or international rankings, said Jiremar.

“We don't have those kinds of ambitions, but we think the purpose of the flag – including everyone and supporting equality – is something that suits our values as a company.”

Replacing Sweden's usual blue-and-yellow mailboxes, the six rainbow ones are placed in strategic locations around Stockholm, such as Västerlånggatan in the tourist-heavy Old Town and the Kungsträdgården park where some of the main Eurovision fan celebrations are currently under way in the capital.

It is just by chance that the campaign – which will run until the day of the Eurovision Song Contest final on May 14th – has ended up coinciding with large numbers of tourists descending on Stockholm for the event, which was won by Swede Måns Zelmerlöw last year.

“No, we had planned this before Måns even won,” said Jiremar. “But it is very good timing and I hope that many tourists will enjoy buying rainbow stamps to send a postcard home.”

When Eurovision was held in Vienna last year, dozens of traffic lights were changed to feature same-sex couples crossing the street, and ended up staying after receiving overwhelmingly positive response.

But there is little chance of that happening to Stockholm's rainbow coloured mailboxes, said Jiremar.

“No, I find that very hard to believe. But personally I think they look really nice.”