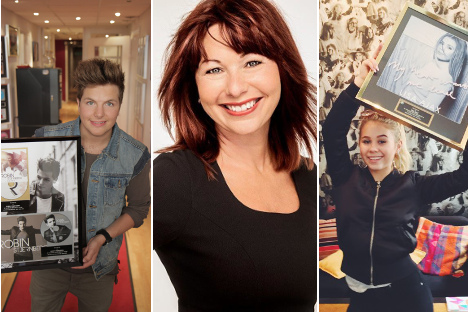 So it's no surprise that the country is also at the top of Eurovision charts. Only Ireland has won the song contest more often than Sweden – and in modern times Sweden has a much better track record.

But why exactly does Sweden have so many successful artists and songwriters? Do Swedes have a secret recipe for making it big in music? The Local asked Maria Molin Ljunggren, the woman behind one of Sweden’s most successful record labels, for answers.

Maria has always had a thing for music.

Raised in a little village in the north of Sweden, far away from the bright city lights and downtown rock’n’roll, Maria did what any young music-lover would do in a small-town high school: She sang in a band.

“I sang on weekends, and when I left school it became my full time job for a while,” she tells The Local. “You could say that was the real start of my love for music.”

It’s a classic tale. Maria decided to move to the city to pursue her dream, and Stockholm become home.

“I knew that I had greater chances of finding work involving music there,” she says. “I actually landed a job at a record company – and I immediately felt that it was right. I thought, ‘This is it. This is my thing.’”

The determined Swede has been flourishing in her field ever since, helping up-and-coming Swedish artists to launch their global careers. Today she’s one of the most influential behind-the-scenes figures in the Swedish music industry. Maria is CEO of Capitol Records, a massively successful record label which is part of Universal Music in Sweden.

The journey has been a long but enjoyable one.

“After less than a year working at that first record company job, the company got into financial problems,” she recalls. “And then I decided to start my own business.” It may seem like a spontaneous and somewhat rash decision, but Maria says it didn’t actually feel like a big deal.

“It wasn’t that big of a step really, as I had been involved in entrepreneurship since I was 12 years old,” she remarks. “So at the time I was a fearless, hard-working young woman.”

In 1991 she merged her record business with her husband and his co-writer’s production company, and together the trio launched Lionheart Music Group.

The bold name is a perfect reflection of the bold, wild-hearted woman – and she hasn’t changed much.

Back in the day she took care of management and live bookings to finance record releases and make ends meet – and now her company is responsible for managing, booking, and releasing records for the cream of the Swedish musical crop.

“In 2007 we sold 51 percent of Lionheart to Universal, and in 2014 they bought the remaining part,” she says. “And that’s when we decided to start Capitol Music Group of Sweden.”

Capitol functions on the same concept as Lionheart – but it’s bigger, better, and broader. Capitol Music Group is an umbrella label for not just Lionheart Records but also Swedish labels Virgin Records, SoFo Records, and Kavalkad.

But it all started with Lionheart Music – still a key player in Melodifestivalen madness.

The company goes in whole-hearted for Eurovision and represents the lion's share (pun intended) of contestants in Swedish Melodifestivalen.

Lionheart Music's chief songwriter, Maria's husband Bobby Ljunggren, has had five songs in Eurovision, and the company has represented many an artist in the European final.

“Jan Johansen in 1995 and Jill Johnson in 1998 were Lionheart artists, and we worked with Charlotte Perelli and Carola as well,” Maria Molin Ljunggren has said. The company also represented Anna Bergendahl in the 2010 competition. “And in 2013 we represented Robin Stjernberg i Eurovision.”

Indeed, Ljunggren and Lionheart have at least one entry in essentially every year's contest, and frequently the songs go straight to the final – such as this year's popular hit “Constellation Prize” sung by Swedish heartthrob Robin Bengtsson, and “My Heart Wants Me Dead” by Lisa Ajax.

What’s the secret to such schlager success?

“We focus on really great artists first and foremost, and view Melodifestivalen as a great opportunity for promotion,” Maria Molin Ljunggren explained in an earlier interview. “Throughout the years the competition has been important for us as a sort of debut for artists.”

So how did it all happen?  How did a young country girl end up leading tomorrow’s Swedish artists into stardom, heading a massive record label?

“That’s a tough question,” she laughs. “It’s about everything from the company’s DNA to an extreme love for music in absolutely all genres.”

But it’s also about being able to spot talent, she says. “The most important part of our success is of course our artists, songwriters, and producers who give us such fantastic material to work with,” she says.

Capitol-signed Takida's latest album, A Perfect World, has hit the top of the Swedish charts

And it’s a symbiotic process, the Swedish musical circle of life – each generation of Swedish artists truly inspires the next.

“Sweden is quite a small country where some amazing artists and songwriters have become world stars, and they’ve made a strong impression. They have, in a very generous way, shared their knowledge and invited young talent into their creative work.”

Inspiration isn’t the only ingredient, of course. Maria adds that it’s the Swedish model itself which contributes to the nation’s musical moxie.

“I generally think music programmes in our public schools, the music education programmes both at the high school and university level, and the many mentorship programmes all of which are of huge importance,” she says.

“But also – maybe Sweden just generally has a society where we are given space and the opportunities to follow our dreams.”

Music is an ever-changing field with never-ending possibilities – especially thanks to the continuous digital development, and Maria notes that it’s gold for artists.

“The potential to reach a global audience is almost unlimited, so the international market is more important than ever,” Maria says.

But, in a country of just over 9 million people, the value of local music scenes hasn’t faded, she adds.

“I’m a strong believer of the local music scene – and for ordinary Swedes, that ‘closeness’ to the artist will always be important,” she says.