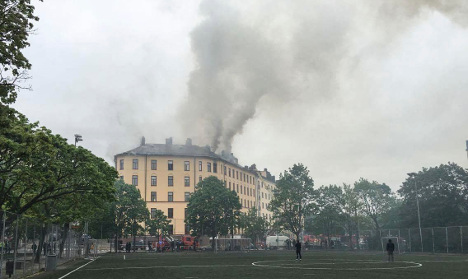 The fire broke out on Friday night in an apartment block at the intersection of Bondegatan/Duvnäsgatan in the Södermalm district of Stockholm, just north of the arena.

However only two people had complained of suffering from smoke inhalation by late on Saturday afternoon, with no other injuries reported.

A total of 35 residents were asked to leave their homes and city emergency authorities said they had resigned themselves to the probability that the fire would spread to other apartment blocks in the area..

Niklas Carl Weitz, lead operator at the Greater Stockholm fire department told Swedish newspaper Aftonbladet: “The fire is likely to spread to other buildings. The roof may also collapse.”

So far, the cause of the fire has not been established, but an investigation into suspected aggravated arson has begun, according to police.