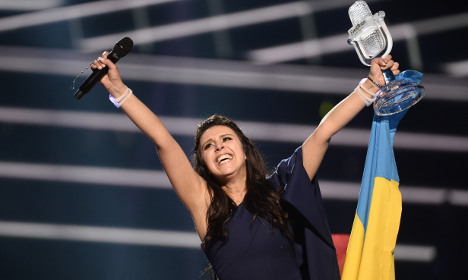 Jamala said she chose to compete in Eurovision because she wanted more people to hear a song written "in a state of helplessness". Photo: Maja Suslin/TT

Those are the harrowing opening words of war-scarred Ukraine's winning entry for the Eurovision song contest — a flamboyant and festive occasion more normally associated with laughs than tears.

The lament entitled “1944” was sung in Saturday's Eurovision grand final in Stockholm by 32-year-old Jamala, a member of the Muslim Tatar minority of Crimea, a Black Sea peninsula annexed by Russia in 2014.

Jamala's words refer to the tragedy that befell her great-grandmother near the end of World War II, when Soviet dictator Joseph Stalin deported 240,000 Tatars — almost the entire community — to barren Central Asia and other far-flung lands.

But the song also has deep resonance for contemporary Ukraine, where memories of that horror were revived by Russia's seizure of Crimea and Jamala's poignant lyrics tell the story of a people with a history of persecution that continues to this day.

The song beat bookies' favourite Russia, bringing unavoidable political and diplomatic undertones to the competition between two nations whose relations have been effectively frozen for two years.

Originally an opera singer who became a jazz star in Ukraine, the svelte brunette said that she wanted to make her song “about my great-grandmother Nazalkhan and thousands of Crimean Tatars who never had a chance to return to Crimea again”.

“That year changed their lives forever,” she told AFP in an interview ahead of the contest.

Over a span of three days in May 1944, Stalin accused the Turkic ethnic group of collaborating with the Nazis and deported them thousands of kilometres (miles) to the east, where nearly half them died in the harsh conditions.

Jamala's great-grandmother was in her mid-20s when she, her four sons and daughter were expelled, while her husband fought against the Nazis in the Soviet Army's ranks.

In a journey that took several weeks, about 8,000 people — mostly the elderly and children — died of thirst and typhoid.

Nazalkhan's daughter did not survive the tortuous trek and “her body was thrown from the car like garbage”, Jamala recalled.

“I needed that song to free myself, to release the memory of my great-grandmother, the memory of that girl who has no grave, the memory of thousands of Crimean Tatars”, who have nothing left, not “even photographs”, Jamala said, tears flowing down her cheeks.

Jamala said she chose to compete in Eurovision because she wanted more people to hear a song written “in a state of helplessness” after Russia seized her land in 2014.

The United Nations, United States and the Organization for Security and Co-operation in Europe (OSCE) have repeatedly condemned widespread human rights violations against the Tatar community that began to occur after Russia's takeover.

The West has also sanctioned Russia for taking Crimea, which is still viewed by the United Nations as part of Ukraine.

The singer herself said she had not visited the peninsula in two years because she was “in the risk zone” for supporting Ukraine.

Her parents and some other relatives remained in Crimea and she misses them greatly, but understands their refusal to leave.

“This is our home. We returned there and nobody has the right to kick us out,” Jamala said with a sigh.