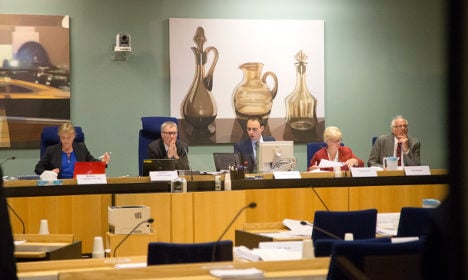 Eight men, aged 19-28, are standing trial over the shooting at a restaurant in Gothenburg's Biskopsgården suburb in March 2015, an attack which grabbed global headlines and saw Sweden's Prime Minister Stefan Löfven cut short a trip to Brussels to meet mourning residents.

Five are charged with murder or attempted murder, while another three are accused of aiding and abetting.

The mood was tense as the trial began on Monday morning, with police positioned outside Gothenburg's district court.

“There is no known threats against the trial. But considering the incident, and that there are a lot of emotions bubbling up when the trial begins, we are of course keeping an eye on it,” a police spokesperson told the TT newswire. The gunmen burst in firing automatic weapons, killing two, when customers at the bar in the Vårväderstorget square in Sweden's second-biggest city had gathered to watch football last spring, a Champions League game.

The prosecutor argues that everyone in the restaurant, customers as well as staff, risked being hit by the bullets. Even those 16 people who survived without physical injuries should be considered victims, and have been called to take the stand over the course of the trial.

Around 30 witnesses in total, including police and members of the public, are also set to testify.

On the first day of the trial, the prosecutor showed pictures of the restaurant after the attack, describing blood stains and 28 empty shells found on the scene.

The trial is expected to take around two months. All eight defendants deny the allegations.

The shooting sparked a debate about gang violence in Sweden's second-biggest city, which has a long history of gang-related violence dating back to the early 1990s.