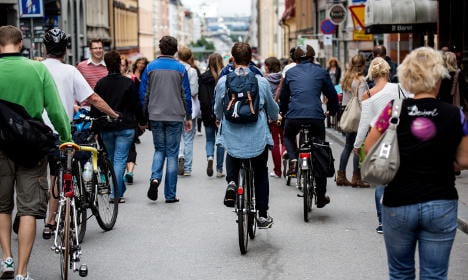 Numerous surveys and research show that immigrants are finding it difficult to enter the jobs market, often facing long waits for residence permits and struggling to get foreign qualifications recognized in Sweden.

Meanwhile, the Swedish tech industry says it is in desperate need to attract international talent.

“Sweden is a lot worse than many others to see that skills come in various shapes and forms. I think that that is one of the mechanisms that makes it so difficult for immigrants to get on to the jobs market and have a career,” Swedish business developer Johan Engström at education consultants Sipu International, who is behind a pioneering initiative to find a common solution to these two problems, tells The Local.

He started 'Sync Accelerator' on behalf of Sipu International in October last year, at the height of Europe's refugee crisis which saw Sweden take in an unprecedented 163,000 asylum seekers.

Since then he has spent hours sifting through resumes, contacting businesses and raising the word – and reveals that the scheme has now succeeded in matching up its first candidates with a company.

Sana Abdullah and Safinaz Awad, two 30-year-old IT engineers from Syria, are just in the process of signing their contracts with BigSpin, a startup based in the bustling Södermalm area of Stockholm, a popular hub for Sweden's booming technology scene.

“We think there's big potential in the group of newcomers and Sync Accelerator makes it easier to reach them. (…) I don't think the [startup and tech] industry could have expanded as quickly without foreign workers,” BigSpin founder Jonathan Persson told The Local on Monday.

Awad, who is based in southern Sweden, and Abdullah are now set to join the design and web developer's four-person team as soon as they manage to find somewhere to live in Stockholm.

“It's exciting. It's very important to me to find a job, to meet new people and learn the language. This company uses a lot of new technologies, so I can learn a lot, and hopefully they can learn from me,” Abdullah, who is currently based in Uddevalla in western Sweden, tells The Local.

The 30-year-old of Palestinian origin has seven years' experience working in IT engineering for the stock exchange in Damascus. But she had to give it up when war broke out and she fled.

“It was difficult to leave, when you have a country you grew up in and all the memories, but we had no choice. I came alone, my family were already in Sweden, they've lived here three years.” Her situation is similar to that of many other asylum seekers in Sweden today, with the exception that Abdullah, with the help of Sync Accelerator, has scored a job just six months after arrival. But for many, even after the long wait (often up to a year) for a residence permit is over, there are still several hurdles along the way.

“It takes new arrivals on average six to eight years to get a job. But with the immigration we have right now we can't afford to fail – we're already seeing rising tensions. But it is also good for the business scene and Sweden's ability to compete [globally] to use the new talent,” says Engström.

Abdullah agrees: “There are a lot of people coming from Syria who are very talented and have a lot of experience especially in the field of IT. It's good to use these qualifications and it will benefit Sweden too. I know a lot of people who want to work, not just learn the language.”

Engström hopes to use the recruitment fee BigSpin has paid to Sync Accelerator to keep the momentum going and match up even more skilled refugees with Swedish companies. With the help of his colleague Abdel El Hennawy he is currently going through the 300 applications he has received.

“We've got 40 people at the moment who have the qualifications needed to be able to work immediately, with minimal introduction to the job. If we manage to get enough funding from that segment, we may be able to provide help for those who perhaps need a bit more training.”

He hopes that his effort will help combat recent statistics which say that 21.4 percent of Sweden's foreign-born population were out of a job in March 2016, compared to just 4.7 percent of people born in Sweden.

The ruling Social Democrat-Green coalition has invested in a number of initiatives designed to help immigrants get jobs, including state-subsidized internships and short-term contracts to help employers taking on foreign staff members. However, because both Abdullah and Awad are still waiting for their asylum applications to be processed, none of these schemes apply to them.

And Engström remains insistent that Sync Accelerator will only match their candidates up with fully paid positions with the same benefits enjoyed by Swedish workers according to trade union regulations.

“There is this view that new arrivals should be interns and work for free. But if they come here with competence then surely they should be paid for that competence?” he argues.

“We have decided that we're going to raise the standard of the product, not lower it. We fight for the new arrivals.”