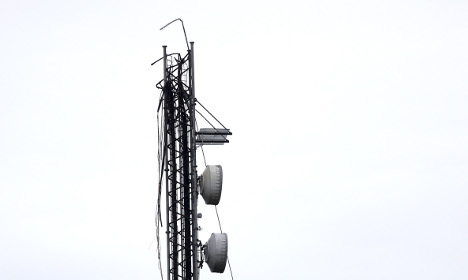 According to state-owned broadcasting company Teracom, which operates the mast, the structure came down on Sunday evening just outside Borås in the southwest of the country. It collapsed from around 100 metres up, with the highest point falling 200 metres to the ground. No one was injured.

The local police, who have labelled the incident an act of sabotage, have yet to tie down any suspects. They are however hoping that the results of a technical analysis of the area on Monday evening will help their cause.

Investigators are working on three possible scenarios for the crime, believing it could have been carried out by either a prankster, a domestic fanatic, or an international perpetrator.

“We are one hundred percent certain that the tower has been sabotaged,” investigation head Jan Johansson told Aftonbladet. “It could be something international, that someone wanted to test what would happen if they took out the mast,” he speculated.

The general security of the mast has been called into question, with state broadcaster SVT reporting that a group of youngsters filmed themselves climbing the structure only a few days before it was toppled.

Aftonbladet meanwhile spoke to a man who claims he managed to walk up to the back side of the mast unchallenged on Monday afternoon, simply bypassing security cordons by taking an alternative route through the nearby forest, facing no barriers en route.

Teracom admits that while the control centre for the mast is alarmed, the structure itself is not, and could therefore be accessed relatively easily.

In response to the incident it has tightened security at its 53 other masts in Sweden, with the company’s communications director highlighting the complexity of successfully bringing down one of the towers.

“We’re looking at this very seriously and it has never happened before”, Teracom spokesperson Åsa Ragnar told SVT. “This isn’t something that is easily done, and moreover it is highly dangerous,” she concluded.