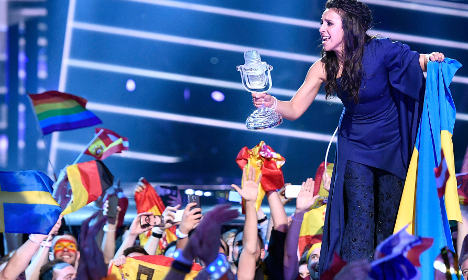 Jamala won this weekend's globally-watched competition with an emotional ballad about the deportation of her Muslim Tatar family and 240,000 other community members from Crimea – annexed by Russia in 2014 – in the penultimate year of World War Two.

But Jamala was allowed to perform '1944' in Stockholm after organizers decided its lyrics referred to events etched in history and not Ukraine's painful loss of its Black Sea peninsula to Russia two years ago.

Russia's hotly-favoured entry placed third – a result that prompted one upper house member in Moscow to remark that “it was politics that beat art”.

BLOG: Eurovision in Stockholm as it happened

The 32-year-old singer told reporters in Kiev that she tries not to pay too much attention to the vitriol and threats of Russia possibly boycotting next year's event in Ukraine.

But “people have this character trait: it is very hard for them to accept defeat”, the trained jazz singer added.

Jamala added that she was most disconcerted by the stakeout that Russian TV crews had allegedly launched of her parents' home.

“They are now hiding with their relatives. They do not want to make any comments,” she said.

Relations between the two former Soviet neighbours have been frozen since Russia's March 2014 seizure of Crimea and the outbreak weeks later of a pro-Moscow revolt that has claimed more than 9,300 lives in the east of Ukraine.

Russia denies charges from Kiev and its Western allies that it hatched and backed the insurgency in reprisal for the February 2014 ouster of Ukraine's Moscow-backed president and the country's decision to align itself with the West.

But both Washington and Brussels officially recognize the presence of Russian forces in the war zone and accuse the Kremlin of trying to keep the new Kiev leadership within its sphere of diplomatic influence.

None of these tensions appeared to matter when the time came for the people of Russia and Ukraine to cast their votes.

Ukrainians chose Russia's entry as their favourite since no country can vote for itself.

And Russia came close to returning the favour by ranking Ukraine second behind its close ally Armenia.