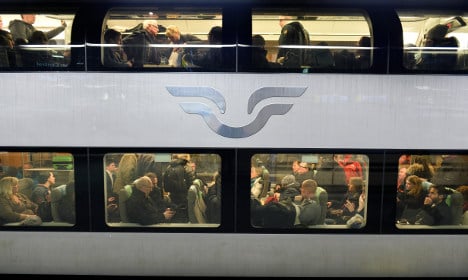 File photo of passengers on board another train. Photo: Marcus Ericsson/TT

The train pulled to a halt just an hour after leaving Stockholm's central station on its way south, reported the TT newswire.

“The train did not get any power,” Christer Lundin, a spokesperson for state-owned SJ, which operates Sweden's railways, told TT about the reason for the halt.

The journey to Malmö normally takes between four and five hours, but six hours later passengers on board were still waiting to start rolling again.

Train travellers told the news agency that they had not been given any food or water during the long wait. But Lundin denied the claims.

“While they waited there was water and something to eat, it's standard for us to offer that,” he said.

One of the passengers on board was Swedish astronaut Christer Fuglesang. At around 3pm he told TT: “It's reached tragicomic levels where people are just laughing in resignation.”

Fuglesang has been in space twice, and both times the landing was delayed by a day due to bad weather, so it's not like he's not used to being stuck in small spaces. But the astronaut was not jumping for joy.

“I just saw that as an enormous bonus, I don't really see this as a bonus,” he said.

READ ALSO: One in three trains delayed in 2015

Sweden saw the first sign of travel chaos on Tuesday, when an overhead wire was torn down near Järna south of Stockholm, causing huge electrical and signalling errors. Passengers on the Stockholm to Gothenburg line also suffered heavy delays yesterday and on Wednesday.

“Those trains are rolling today, but there are delays because some of them have had to be rerouted,” said Lundin.