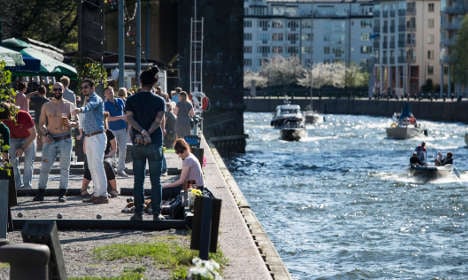 Stockholmers enjoying the warmth earlier in May. Photo: Pontus Lundahl/TT

Sweden has had a – let's just say interesting – spring, with a sudden heatwave rolling in across the country as a treat after an unusually chilly April and the winter you never thought would end.

And the excitement is set to continue, according to forecasters at the SMHI weather institute.

“The weather is going to be a bit back and forth, with patches of precipitation passing through the country,” meteorologist Sandra Andersson told the TT newswire about the coming weeks.

Based in northern Sweden's Jämtland or Västerbotten regions? Pull up your hoodie. You can expect less than five degrees, with a couple of centimetres of snow or sleet on Wednesday and up to five centimetres overnight, said SMHI as it issued a level-one alert (the lowest on a scale from one to three).

Perhaps counter-intuitively, it also issued grass and forest fire warnings for the far north and southern Sweden on Wednesday. So be careful if you decide to throw a barbecue in the snow, everyone.

But there's good news ahead.

Southern and central Sweden is set for 15-20C with rays of sun peering through the clouds this weekend. Even in Norrland, temperatures are predicted to edge up to 15C on Saturday and Sunday.

“It will be mostly cloudy, but the sun may peek out,” said Andersson.

The changeable weather comes after Stockholm enjoyed the warmest start to May in 25 years, with temperatures topping 26C, around 10C higher than usual and hotter than much of the Mediterranean.

Southern and central Sweden officially entered summer in early May after temperatures reached double digits for more than five days in a row.