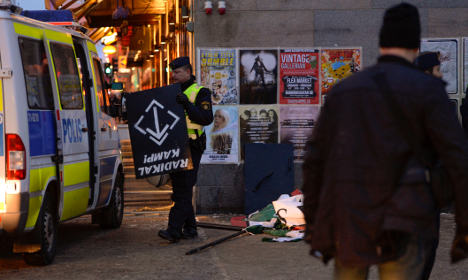 Police clearing up after a violent neo-Nazi demonstration in Stockholm this year. Photo: Jessica Gow/TT

According to an annual report by the Swedish anti-racism foundation Expo, neo-Nazi groups carried out 2,222 activities in 2015, down from a record 2,865 activities the year before.

“The survey shows that the activity within the racist movement fell in 2015,” Daniel Poohl, CEO of Expo Foundation, told Swedish Radio on Thursday.

“It was primarily as a consequence of 'Svenskarnas parti' ('the party of the Swedes') – which mobilized massively during the election year [in 2014] and failed – closing down in 2015,” he said.

Instead the neo-Nazi group the Nordic Resistance Movement ('Nordiska motståndsrörelsen') is growing, he said. The group was involved in attacks on an anti-racism protest in Kärrtorp in southern Stockholm in 2013.

“This is very much the most radical and violence-loving part of this environment,” said Poohl, adding that although neo-Nazi activities appear to be decreasing, the movement's operations have got more difficult to assess.

“There are more small groups, and it is harder to get an overall picture of the political landscape. But perhaps the most interesting and alarming: the growing seed of vigilante movements connected to environments where there are extreme right-wing ideals,” said Poohl.

Sweden has been seeing increased tension after taking in an unprecedented number of refugees in the past year, including several dozens of asylum centres or future centres being set on fire. But the suspected arson attacks are not part of Expo's figures, because few people have been arrested.

“This whole environment has partly praised but above all excused these attacks and seen them as legitimate means of opposing immigration. (…) The fact that many of these attacks are directed at planned accommodation indicates that there is a strategic awareness of when to hit. A kind of low-intensity terror,” said Poohl.