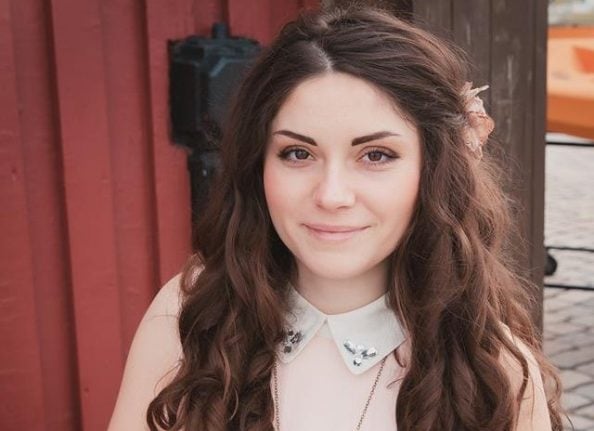 Before coming to Sweden, Bohdana Kozubenko was a planner.

”I always wanted to know what would happen ahead of time,” she recalls. ”I was very sructured and planned. I didn't want to feel insecure.”

Today it doesn't worry her so much. Just days away from graduation, Bohdana doesn't know if she'll go back to her native Ukraine, return to her other previous homes of Germany, the US, Lithuania, or Greece, stay in Sweden, or end up somewhere else entirely.

”Now I like this feeling of not knowing,” she says. ”I'm not worried. When you don't know what comes next, you're more open to the possibilities. That's what my programme in Sweden taught me.”

For the past two years Bohdana has been studying Business and Design at Gothenburg University. It was coincidence, or maybe fate, that led her to the programme. On a visit to Stockholm she met someone who described life in Sweden to her, and she found herself drawn to the vision.

”So I started to Google. I knew the precise combination of subjects I wanted to study after my Bachelor's degree, and I found it online within seconds, in Gothenburg.”

After that she did a search for scholarships for Ukrainians -and sure enough, found the SI Scholarship.

”It all happened within seconds. I decided to apply for both.”

She nearly wept with joy when she found out she had been accepted and received the scholarship.

”It was a very emotional day for me,” Bohdana recalls.

”It was the only thing I wanted, the only bet I had – the only idea for my future. This is the kind of scholarship which gives you the opportunity to get a masters degree in one of the most developed countries in the world – something which wouldn't have been possible for me otherwise. It's like – getting the chance to do something you can't even imagine.”

Bohdana arrived in Gothenburg at night, and when she walked out in the morning light the next day, she was in awe.

”I had never experienced this level of diversity in one place,” she remarks. ”I was impressed by how many different people there were here. I was so excited to hear the different languages and see people from so many different countries.”

Her programme at the university was also diverse – the students came from many countries and backgrounds. It was challenging at times, she says, for the students to understand each other. Some came from design backgrounds and others from the business world, and their perspectives sometimes clashed.

”We had to align our understandings and it was rough. But in the end it worked out, and the result was always great. Our different perspectives led to truly great solutions, and it was a beautiful process.”

Another challenge for Bohdana was the grading system – or lack thereof. She was accustomed to receiving grades for her work and being very results-oriented, always striving for a top grade.

”But in my programme we didn't have grades, we only had pass and fail,” she explains. ”And in the end you didn't really care about the result anyway. What mattered was how much effort we put in.”

It was difficult for Bohdana to adjust to the system, but she gradually began to appreciate it.

It's a mindset she hopes to take with her as she prepares for the next stage of her life. She doesn't know what will come next, but she looks forward to it, and is enjoying this moment – the end of one journey and the beginning of a new one.

She was honoured to be asked to give a speech at the SI 2016 Diploma Ceremony, but she wants to be clear that her speech is not directed from her to her peers: She is a part of the group she addresses.

I'm not talking to people in the distance,” she says. ”I am part of this group. I am speaking to us, not 'you'.”

”It's overwhelming emotionally,” she confesses. ”In this ambiguous period, of course you feel uncertain and unsure. But on the other hand, we have all these opportunities in front of us, in every corner of the world. We are people with huge potential and this cannot go unnoticed.”

She says it's important for her to convey this to her fellow students when she gives her speech at the diploma ceremony next week.

”It's important not to be too stressed aboout this. We will all figure out. The most important thing is fo find something you love doing, something your heart leads you to. And without knowing what comes next, we don't have any limits. We're open for anything.”