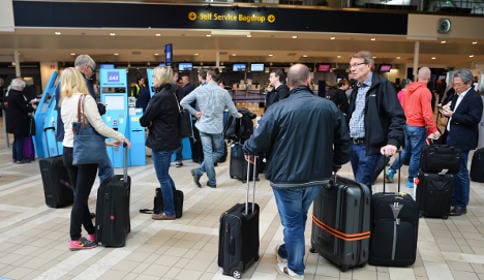 A spokesperson for Luftfartsverket, which operates air traffic control in Sweden, said just after 1.30pm that a communications issue which forced authorities to close Stockholm airspace on Thursday afternoon had been resolved.

Issues with data communication in Sweden, which emerged before noon, had meant no planes were able to take off, though some were allowed to land. The issue was understood to have affected most of Sweden, but worst hit were the capital's airports Arlanda, Bromma and Skavsta.

It is unclear how large the closed area was, but some flights were diverted to Malmö in southern Sweden. Passengers stuck on flights on the ground posted on social media about lengthy delays.

I'm on a plane stuck on the runway. One hour and counting… FUN https://t.co/F6KlrSDMEP

At least 2 hours flight delay announced due to radar system failure in the #stockholm airport… https://t.co/kjsG8gx82o

A The Local reader travelling to Stockholm said she had been told to disembark her plane at Heathrow airport in London and wait at the gate, while luggage and the flight crew remained on the aircraft.

“It's a bit worrying that this has happened before and no one really seems to have any clear idea of what is happening and whether it is at Arlanda or across Swedish air space generally,” said journalist Heather Farmbrough.

“I would be happy to go home and come back tomorrow as would a number of people sitting near me, but BA seems keen to get out to Stockholm and as its aircraft to Stockholm are relatively large, it would be complicated to re-route so many passengers.”

Swedish air traffic control said that traffic would soon resume, but that passengers could expect delays throughout Thursday.

“It's going to take the rest of the day to get it going again. We had a break for two hours, so it's going to take a while to get up to speed again,” Per Fröberg told the Aftonbladet tabloid.

There was no suggestion of a terror threat, according to Björn Stavås, who is head of air traffic control at the city's central Bromma airport. “The communications issue means we have to land the planes that are in the air and not allow any new take-offs to start,” he told DN earlier in the day.

By the end of Thursday the source of the issue was said to be a problem with the network which handles radar and communications equipment at both Arlanda and Bromma.

The closure came on the same day that an EgyptAir flight with 66 people on board disappeared from radar en route to Cairo from Paris.

In November planes at some of Sweden's busiest airports were grounded for at least an hour after what was described as a powerful solar storm interfered with air traffic control radar systems.

Two closures in a relatively short time period has led to criticism from one aviation expert, who highlighted the costs involved in taking such measures.

“Someone needs to take responsibility and make sure this doesn’t happen again,” aviation journalist and author Jan Ohlsson told TT. “If airspace is closed it quickly becomes a really big problem. A break like this for only a few hours costs millions of kronor,” he added.

Sweden’s Infrastructure Minister Anna Johansson was in close contact with air traffic control operators Luftfartsverket on Thursday, and will speak with those involved to find out what has happened, what the cause could be, and how it can be avoided in the future.

When probed on whether the incident could be linked to the recent sabotage of a radio mast in Borås, as well as problems with Swedish railway operator SJ’s booking system, Johansson didn’t want to speculate, though she did say all possibilities would be considered until ruled out.

“It is entirely possible that they have occurred independently of one another within a short time frame. But we are clearly looking to see if there is a connection, that is also the part of the follow up,” she told TT.