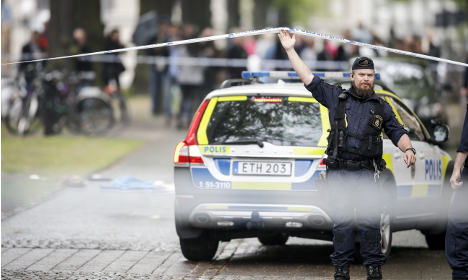 Police at the site of the shooting in Gothenburg. Photo: Adam Ihse/TT

The alarm was raised at 12.45pm after several shots were fired. Witnesses claim to have heard the shots close to the city’s main drag, Kungsportsavenyn, before discovering the victim, who has injuries in at least one of his legs.

A possible suspect fled the scene on a grey moped towards the Järntorget square and Haga district in the western part of the city centre.

“Crime scene investigators are working at the location. Multiple units including a helicopter are looking for the perpetrator,” police spokesperson Petter Adlersson told The Local.

Police were able to speak with the victim, who has not lost consciousness and is now at a hospital in the south of the city. “He was found with multiple shot wounds and has now been taken to Sahlgrenska hospital,” Adlersson explained.

Local newspaper Göteborgs Posten report that the shooting may be gang-related, and that individuals with connections to the city's crime underworld were present at the scene earlier in the day. The police later confirmed that the incident was not a random crime, though they did not want to specify which gang or group may be involved.

“There's a history and a background behind this,” police spokesperson Stefan Gustafsson told news agency TT. “A person hasn't been shot down on a street in Gothenburg by pure coincidence,” he added