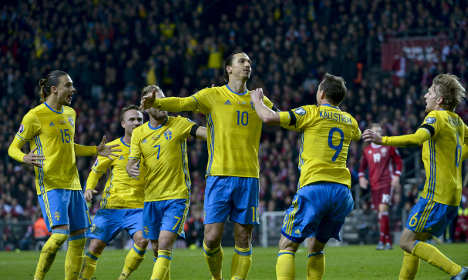 The man has never been short of confidence. Photo: Jonas Ekströmer/TT

The confident striker made his prediction after hearing Sweden’s official song for the tournament, 'My Team', which was released on Friday morning.

“Now we have the song that will make us win the European Championship,” he told the Swedish national football team's official Facebook page. “I’ve heard it and I can now say, this song has already won the Euros. Now we’ll win the Euros,” he added.

The 34-year-old, who becomes a free agent in June and has already been linked with some of the biggest clubs in the world, hailed the quality of the song while at the same time taking a dig at other Swedish musicians, particularly those who participate in the country’s Eurovision Song Contest qualifiers, Melodifestivalen.

“This is no Melodifestivalen song,” he said. “No no no. This is the real deal. With all respect for the others, they’re OK, but this is on my level. Now we’re talking.”

In contrast to Ibrahimovic’s praise, reaction to the song has been less enthusiastic from posters on the Swedish national team's Facebook page.

“I understand the song has been done so they could use the hashtag #MittTeam (my team) but it isn’t especially good,” wrote Tobias Nolervik. “This is definitely a future classic, but unfortunately, in the wrong way,” added Nikko Von Prag. “I agree with the other comments. I couldn't make it through the whole thing. Terrible,” said Anette Löfstedt.

More positive thinking will be needed this June if Sweden are going to fulfil Ibrahimovic’s outlandish prediction in France. The highest they have ever finished at a European Championship was 4th in 1992, when the tournament only included eight teams. This summer by contrast, 24 different nations will be involved. Sweden are looking to make a major improvement on two successive first round exits from the previous two editions of the Euros.

As for how successful 'My Team' is, make up your own mind by listening to the song below.