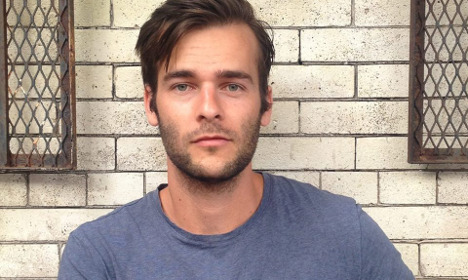 “My whole family are firefighters. I did it for three years, there's good camaraderie, but nothing ever changes – you put the wet stuff on the hot stuff. I really feel like the entrepreneurship is challenging on a larger level,” he tells The Local.

“But I'm not one of those extreme entrepreneurs who would never get a job!”

At the age of 23, when his Swedish girlfriend ran out of her visa in Australia and moved from Adelaide on the south coast to Umeå in northern Sweden, Batley followed. But deciding that he did not want to get stuck in a new job he would not enjoy, he applied for a master's degree in entrepreneurship in Lund.

“When I got accepted, that was my best moment in Sweden, it was amazing. I came on a 'sambo' [a Swedish word for a co-habiting partner] visa so I got treated as a Swede, which meant that university was free.”

In Lund, he quickly got inspired by the booming startup industry in the southern Skåne region, which is connected to Denmark's capital Copenhagen via the Öresund bridge.

“Skåne is trying really hard to get rid of the 'poor farmer' reputation,” he says. “In a way it's the little brother to Stockholm, so it's trying harder. It's amazing, if you've got something new and innovative people are always willing to take a meeting.”

But he realized that many other expats and immigrants were struggling to get to grips with the Swedish startup world. So together with his friend Sasa Farkas, from Serbia, he came up with the idea for an app to help newcomers to Sweden launch a successful career by starting their own company.

“Sweden has a reputation for having one of the best innovation support systems in the world, but if you don't know how to navigate it it's messy and it's a waste of time,” he says.

“Even the small things. In our first months, I was trying to pitch an idea to a Swedish woman who kept saying 'call me back next week, call me back in six months'. Eventually she told me 'stop calling me'. I hadn't realized that what she had meant from the start was 'no'.” Half a year down the line, the Swedish Innovation Compass has been downloaded more than 5,000 times and Batley, several times nominated for young entrepreneur of the year awards, is reaping the rewards.

The Swedish Innovation Compass's basic concept is to help budding entrepreneurs take advantage of all resources available in Sweden, by providing links to government grants, competitions, co-working spaces and everything else you need to starting a business in the Nordic country.

“It's a smart, sexy phonebook, the way it's supposed to work,” says Batley, adding that they are currently working on creating an Arabic version to tap into Malmö and Skåne's large Middle Eastern population.

“The response has been incredible. It's really nice because it's a company, but it's still a social thing. Almost everyone we talk to will take a meeting.”

He relocated to Stockholm just after launching the app, after his architect girlfriend landed a job in the capital, and says he is most likely in Sweden for the long haul.

“Sweden's really similar to Australia and yet really different. In 1998 my dad won a scholarship to travel the world and took us with him. We went to Sweden and actually found it more similar than the UK and US.”

“Australia may have the good weather and friendly people, but Sweden wins in all the important ways: 'föräldraledighet' [parental leave], 'dagis' [nursery school] and free education,” he says.

But the experience has not been without the odd culture clash, even for the laidback Australian.

“Two weeks ago I had a surprise party thrown for me. A Swedish friend invited me out for a beer and I was so shocked and pleased that a Swede had done something spontaneous – and then of course it all turned out to be part of a big strategic plan,” he laughs.