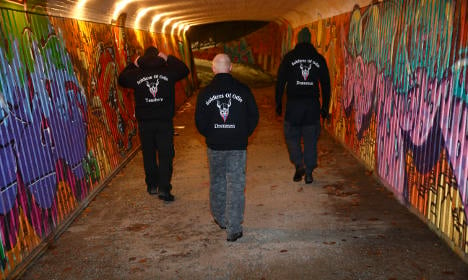 Steffen Martinsson, who works at Södertörn District Court in the south of the capital, said earlier on Monday that he is a sympathizer with the organization, and admitted joining them on a patrol in March.

“I walked together with them one time because they want order in Sweden. I thought that was quite good. There’s nothing more to it,” he told Aftonbladet.

But following criticism from his party and beyond on Monday, he announced he would be stepping down from the court.

“We had a long talk this morning. Together, we agreed that it would be best for everyone if he left the position,” Sebastian Lindqvist, chairman of the Sweden Democrats' Botkyrka branch, told the tabloid.

Earlier on Monday, the link between Martinsson and the Soldiers of Odin was described as ‘inappropriate’ by the country’s Interior Minister, Anders Ygeman.

“I think it is inappropriate, but the head of the court is the person who decides and chooses whether to remove someone from a lay judge position,” Yngeman told Aftonbladet.

The Interior Minister has previously criticized the Soldiers of Odin’s patrols in Swedish cities, telling news agency TT in April that “the last thing we need to create order in Sweden are extreme-right criminals on the streets”.

The Soldiers of Odin, who were founded by Finnish Nazi Mika Ranta, claims its patrols are necessary to protect Swedish citizens from violent attacks carried out by immigrants, and has staged walks in Gothenburg and Uppsala as well as Stockholm. Swedish members of the organization have been convicted of serious crimes and Nazi sympathies in the past.

This is not the first time that some of Sweden’s lay judges have been involved in controversy. Several Sweden Democrat-appointed judges were forced to step down in April 2015 after claims that they posted racist comments online.