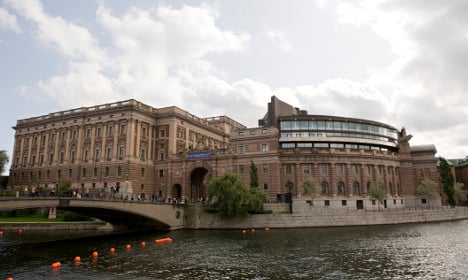 The Swedish parliament will vote on the agreement this week. Photo: Henrik Montgomery/TT

The Swedish parliament (Riksdag) will this week vote on whether to ratify a so called Host Nation Support Agreement (HNSA), which would allow Nato forces to exercise on the country’s territory and come to its aid in time of crisis.

While the agreement was previously expected to go through, there are now suggestions that the far-right Sweden Democrats and the Left Party could combine to initiate a stay of proceedings, which would stall the ratification by a year.

A stay of proceedings would require the support of a sixth (58) of the 349 Riksdag MPs. The Sweden Democrat’s 48 seats combined with the Left Party’s 21 would therefore be sufficient.

“The HNSA risks undermining international confidence in our neutrality We will vote for a stay of proceedings on the subject,” Sweden Democrat MP Mikael Jansson told TT.

“(Defence Minister) Peter Hultqvist has been very clear about saying no to Swedish membership of Nato, yet at the same time he is prepared to enter into a long series of agreements that would bring us very close to Nato and would change perceptions of how other countries view us,” he added.

TT reports meanwhile that the Left Party will justify its position by saying that the changes to Swedish law required to sign the agreement carry a risk of limiting the rights and freedoms in the country’s constitution.

Originally signed in September 2014, the HNSA with Nato would allow the alliance to transport helicopters, aircraft and ships across Swedish territory, but only after Sweden’s invitation.

As the agreement involves changes to Swedish law in order to give Nato personnel privileges and immunities with regards to areas like tax and custom rules, it will require parliamentary ratification. Voting is due to take place on Wednesday, and if passed the agreement would come into force on July 1st, 2016.

Public opinion in traditionally non-aligned Sweden has shifted towards Nato in recent years.

A Sifo poll released in September 2015 showed a marked change, with more Swedes in favour of joining the military alliance than against.