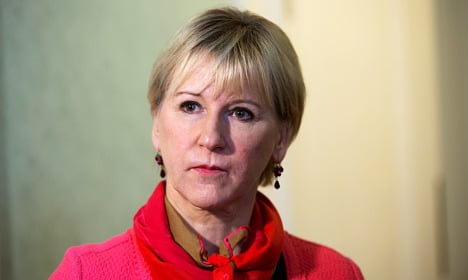 A preliminary investigation examining whether Wallström had accepted a bribe has now been dropped, a prosecutor told TT.

Sweden's national anti-corruption unit announced earlier this year that it was launching a preliminary investigation following claims that Wallström was helped by a trade union to jump Stockholm's queue for rent-controlled housing, while the city battles a record housing shortage.

“It’s good that this has been looked into,” Wallström told TT in a written comment. “Now I’m looking forward to focusing fully on my job.”

Prosecutor Alf Johansson said he had “not been able to find that there was a so-called service connection, that is to say a perk in the form of a rental contract given to the minister because of her mandate.”

The anti-corruption prosecutor said it was outside his remit to examine whether any other sort of impropriety had taken place.

“We conducted around 25 interviews and went through the documentation,” he said, noting that Wallström herself had not been questioned.

The scandal broke in January when Swedish trade union giant Kommunal, which also owns several properties in the capital, was accused of renting out its apartments to labour movement bosses while refusing to release them to the public housing queue.

Kommunal’s former secretary, Anders Bergström, was previously suspected of giving a bribe but the prosecutor said there were no longer any suspects in the case.

He would not say whether anyone else had come under suspicion as part of the preliminary investigation.