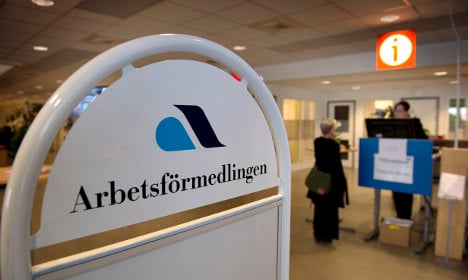 A grim outlook is predicted for foreigners in Sweden. Photo: Jessica Gow/TT

The organization’s most recent round of statistics show that unemployment among native Swedes is at its lowest since before the global financial crisis in 2008, falling to 4.7 percent in April 2016.

But for residents born outside of Sweden, the likelihood of being employed is much lower, with 14.9 percent out of work in the same time period.

Though that figure is down from 16.6 percent in March, a failure to match the rate of reduction in unemployment among native Swedes means there remains an employment gap of more than 10 percent between the two groups. And rather than reducing, experts warn that the distance will soon grow.

“Right now we see no signs that the trend will be broken,” Mats Wadman, head analyst at Arbetsförmedlingen told news agency TT. “Our assessment is that the gap will continue to grow,” he added.

One of the main reasons the agency predicts a further widening of the gap is the influx of new arrivals in Sweden over the last year due to the refugee crisis. Arbetsförmedlingen suggests that many of those newcomers will begin to look for a job after around six to 12 months in the country upon receiving a residence permit, and that there is a need for both education and investment in housing to steer the newcomers into work.

In response to the new figures, Sweden’s Finance Minister Magdalena Andersson has promised more action from the government in an effort to encourage the country’s foreign-born citizens into the labour market.

“This is in no way something one should sit down and accept,” she told TT. “We need to take more action to ensure more young people and those that are new in Sweden can enter the labour market,” she added.

While Andersson would not specify what kind of action may be taken, she highlighted already present measures designed to fast-track new arrivals into the labour market, and insists the government will continue to develop its policy in the area.

In December, Arbetsförmedlingen made the grim prediction that by 2017 up to 60 percent of the unemployed living in Sweden will be foreign-born, highlighting the challenge of finding work for new arrivals, particularly those with low levels of education.