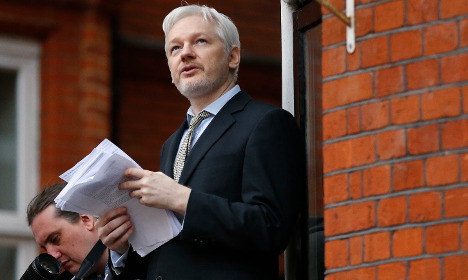 The court rejected his lawyers' request to hold another court hearing to have the arrest warrant lifted.

“The district court finds that there is still probable cause for the suspicion against [Assange] for rape, less serious incident, and that there is still a risk that he will depart or in some other way evade,” it said in a statement published in English on Wednesday.

“Whereas [Assange] would not appear at a hearing and no new circumstances have been presented in the case the district court has not considered it necessary to hold a new hearing,” it said.

Assange will appeal the ruling, one of his Swedish lawyers, Per Samuelsson, told the AFP news agency.

“I just spoke to him, and like us he is not surprised but very critical and angry,” he said.

Julian Assange's lawyers and a UN Working Group on Arbitrary Detention have been fighting for the European arrest warrant against the whistleblower to be lifted, arguing that he is being forced to live in violation of his human rights, including the chance to secure asylum.

“Unlike the UN Working Group on Arbitrary Detention the district court does not consider [Assange's] say at the Embassy of Ecuador in London a form of detention,” it said.

Assange, 44, sought refuge at Ecuador's London embassy in June 2012 after exhausting all his legal options in Britain against extradition to Sweden.

Swedish prosecutors have said that they are still seeking to question the Australian over the rape allegation in Sweden dating back to 2010, saying that he should not be allowed to walk free in the meantime.

Assange denies the rape accusation and says he fears Sweden would send him to the United States, where he is the target of a secret grand jury investigation linked to his website's divulging classified US military documents and diplomatic cables.

Samuelsson said that was the point of Assange's refusal to travel to Sweden.

“The Swedish justice system only takes into consideration the Swedish bit, and not the whole situation given the tough sentence hanging over him in the United States,” he said.