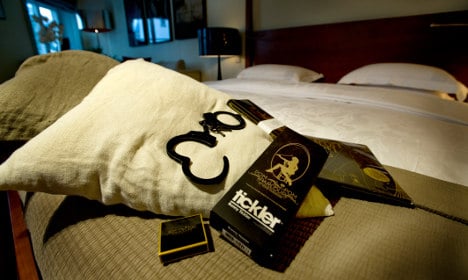 Swedes may have a reputation for being as cold and reserved as the Arctic climate, but an online company selling sex toys has revealed that it has most of its customers in Kiruna, the northernmost municipality.

Residents of Kiruna in the far north buy more sex toys per capita than anywhere else in Sweden, and 2.05 times more than the national average, according to research by online webshop Sinful, which presented its 'Sexiest Municipalities' barometer this week.

“It shows that in the north people are generally more open to experimenting and trying new things in the double bed,” Mathilde Mackowski, one of the founders of Sinful, said in a statement sent to The Local.

We will leave it up to you to decide how scientific you feel the survey is, but the statistics were put together by analyzing the store's most recent 100,000 orders and comparing them to population size in each area.

“We have experienced a large increase in the sales of sex toys in the past few years. Customers like to shop online and we see that the northernmost municipalities are clear winners,”  said Mackowski.

“In 2015 Gällivare took home the title as 'Sweden's sexiest municipality', but this year they have been overtaken by their neighbour Kiruna.”

Kiruna is a mining town, mostly known for being knocked down and moved last year because of safety concerns over the large iron ore quarry's underground expansion. Around 23,000 people live in the entire municipal area, which is Sweden's largest in geographical terms. The sun does not set in summer. According to the survey, those in the town of Västerås in central Sweden are the most likely to engage in more advanced bedtime activities. The municipality was in top for orders for handcuffs, blindfolds and whips.

The top-ten sexiest municipalities in Sweden