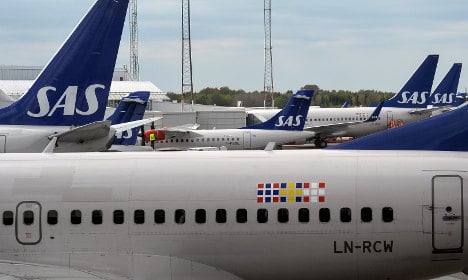 A total of 113 flights to and from Sweden were grounded on Thursday last week after a radar glitch, on the same day rail operator SJ had problems with its booking system, and just days after a telecom mast was destroyed in an apparent act of sabotage.

On Friday, Infrastructure Minister Anna Johansson met representatives from SJ and other authorities, including officials from Luftfartsverket, which is responsible for air traffic control, to discuss what happened.

Afterwards, she said they had found no suggestions indicating that the air traffic network failure was linked to the other incidents.

“The important conclusion is that there was no intrusion from the outside, that is, there was no sabotage, and there was no connection to other incidents happening on that day,” Johansson told the TT newswire. The director-general of Luftvartsverket, Olle Sundin, said that its officers had chosen to shut down airports in Stockholm, Gothenburg and Linköping just before lunchtime on the Thursday after two out of three IT systems had issued alerts that the information received from radar and telecommunications was unreliable.

“The circumstances were fairly undramatic. Our air traffic controllers were able to operate in a normal environment. But we chose to shut it down for the reason that our aviation safety model says that we should not work with only one operational system,” he said.

Both networks were provided by Swedish telecom giant Telia, which accepted blame for the failure.

However, both Luftfartsverket and the Swedish Transport Agency (Transportstyrelsen) said that they expected a full investigation to be launched into the incident.

“We note that considering the given situation, everything was handled well. But we have asked for a report to decrease the risk of this happening again. It will show if any extra technical measures are required,” said transport general-director Maria Ågren.