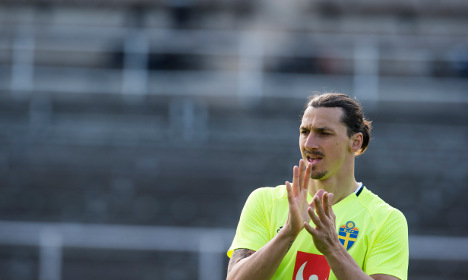 Ibrahimovic is pondering his next move. Photo: TT

Mino Raiola told Swedish newspaper Expressen: 'We have not decided anything yet. I think it will be a surprise in the end. Everyone is harping on about only United, United, United.'

He added: 'There are some clubs in England, a few clubs in Europe, clubs outside Europe, but everyone assumes that he must go to Manchester United, but it is not true.'

Ibrahimovic “will pull a surprise,” said Raiola, who assured “it’s not true he’s going to Manchester United.”
United have been touted as the favourites to sign Ibrahimovic following Jose Mourinho's appointment as manager.

Mourinho worked with the Sweden captain when the pair were both at Inter Milan in the 2008-09 season.

The Swede is a free agent when his contract with Paris Saint-Germain expires next month and he has also been linked with Milan or Inter.
“We could well pull a surprise at the end. Will he retire? Absolutely not.”
“Ibrahimovic is a star and the club that gets him doesn’t need to pay a transfer fee. That means Ibrahimovic, who just finished a record season at PSG, can get an extra-high salary. He is in a good bargaining position.”
“It is not important to get something done quickly, as I care only about arranging a move based on quality. We are not in a hurry.”
“It’s about doing the right thing at the right time. Let’s see what happens.”