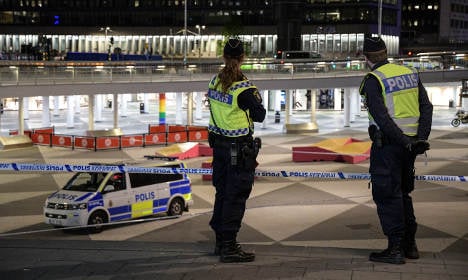 “We got a call from a patrol. Two policemen were standing on the square talking to some people when they were attacked by a man who had a knife,” said Carina Skagerlind, spokesperson for the police in Stockholm, after the incident on Saturday night.

“One of the officers drew their weapon and responded with gunfire. The knife man was shot several times in the stomach.”

The man, who was seriously injured, was taken to hospital in a police car.

“He threw a knife at officers and had another in his hand. Then they shot him. He fell down and could not move. Then they went up to him with weapons drawn and pepper sprayed him in the eyes before they took him to the police car,” a witness told Swedish newspaper, Aftonbladet.

Police technicians spent the rest of Saturday night combing the square for clues. The incident is being classed as an attempted murder or manslaughter.

The shot man was not immediately identified.