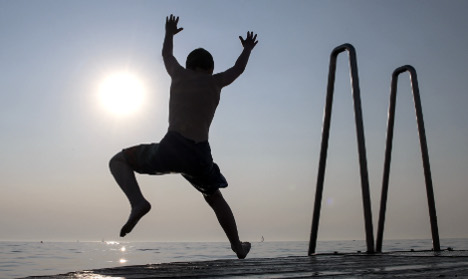 It could be time for that first swim of the year in Sweden. Photo: Johan Nilsson/TT
Last weekend was a nasty wake-up call for anyone starting to get comfortable with warmer temperatures in Sweden, with rain soaking large sections of the country.
The good news is that it's over for the minute: this week will see the return of summer weather, and temperatures are set to rise well above the average for early June.
Sweden was soaked with showers during the end of May as the first steps of summer were rudely interrupted by wet weather. The downpour was so severe that national weather institute SMHI issued a class-1 weather warning for heavy rainfall in the east of the country.
That was a sobering response to the official arrival of summer earlier in the month, but it now looks like the party can recommence. Monday should be a hot one in southern regions, with Gothenburg and Malmö set to register temperatures in the mid-20s, and the warm air will gradually spread northwards over the course of the week.
Many parts of Sweden will get close to 25C in the coming days, and on Wednesday it could even be as warm as 28C on the west coast. In general it's going to be much warmer than usual for this time of the year.
“In the middle of June it's usually between 18-20C, so 25 is definitely higher than normal,” SMHI meteorologist Lovisa Andersson told news agency TT.
The pleasant weather will last for the majority of the week, and though cooler air will eventually start to appear in the north as the next seven days progress, it isn't yet clear if it will spread south.
As for the weekend: dry weather is expected, so it could be a good time to plan that first dip in the water or to get the barbecue running again.