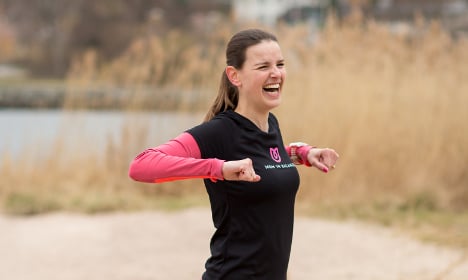 A previous resident of eight different countries, Terstegge describes herself as someone who has been moving all her life. She came to Stockholm from Paris last year due to her husband’s work with Air France KLM, and wasted little time before setting up a company that combines both her passion for sport and the Swedish love of exercise.

“Mom in Balance is a concept that was already very big in Holland and I knew they were looking for franchise owners and entrepreneurs to take it abroad,” she explains. “It’s the perfect thing for Sweden because health and fitness is very important to the Swedes, as is being outdoors. Even the kids have to be outdoors three or four hours a day at 'dagis' [nursery school],” she laughs.

Mom in Balance may already be an established brand in the Netherlands, but while as a franchise holder Terstegge gets the perks of using their logo and website style, she stresses how important it was to adapt the concept to the Swedish way of life, where parents get as many as 480 days of parental leave to share.

“In Holland you’re not allowed to bring your babies to sessions, but that’s because back home you put your baby in childcare after three months and go back to work,” she says. “Here, I told the headquarters that it wasn’t going to work if I told customers they couldn’t bring them. Women have ‘mammaledighet’ [maternity leave] for a year here, and want to do things.”

“I’ve also had to adapt the hours. The working days are shorter. You have to see what the Swedish way of doing things is,” she adds. While it was necessary to adjust some key details to the local lifestyle, one aspect seemed tailor made for Sweden. All of the Mom in Balance workouts are done outdoors, regardless of the weather, and in a country where it is common to get out and exercise come rain, shine or even snow, Terstegge knew her business could be a hit.

“People here send their kids out for three hours in the rain, with all the right gear. They’re fine to go outside, they’re so prepared with their winter clothes,” she notes. “You notice that in our course for after birth, where mothers take their babies with them. Even in zero degrees they just wrap their babies up, put rain covers over the buggy, and go for it.” Swedes have no qualms being outside on a damp day. Photo: Sandra Jolly Photography

It wasn’t all clear sailing though. One of the most common complaints from entrepreneurs setting up shop in Sweden is that the sheer volume of rules and regulations can slow things down, and Terstegge also experienced that side of the Nordic nation.

Despite the occasionally frustrating red tape, Terstegge is keen to highlight the abundance of assistance she received when putting her business in action, and feels that in other instances Sweden’s penchant for detail can also speed things up.

“People are so helpful here, everyone speaks English. Even though my bookkeeping for example is difficult because I have to have Swedish software, you can always call people,” she says.  “With your 'personnummer' [personal identity number] people can really assist you. You want insurance? You call up and it’s organized in one day. Setting everything up is easy because of that.”

She was also impressed with the help available for those still in the early stages of planning a business.

“There are NyföretagarCentrum [centres for new business owners] in towns and villages, and they also have something called Start-up Stockholm. They can help with business planning, financial planning. They were very helpful, and offer courses in English.” The sport obsessive thinks support is still lacking for internationals in the dreaded area of VAT returns and bookkeeping however. Two daunting tasks that can be demanding for newcomers unfamiliar with Swedish financial jargon.

“I’d like them to go a step further and offer more than the basic courses, for example courses on VAT and bookkeeping in English,” she suggests. “Taking the next step is difficult. I’d like to do my bookkeeping myself as I've done it for my previous companies, but you buy Swedish bookkeeping software, you look at it and you think ‘OK…’.”

In general, though, Terstegge feels that being in Sweden has made it simpler to get her company up and running.

“Stockholm is an easy city. Compared to other countries the flat organization makes it simple. I’ve had a really positive experience,” she concludes.

With Mom in Balance already proving to be a hit in its three current Swedish locations of Bromma, Danderyd and central Stockholm, the entrepreneur thinks there is no better place for her enterprise.