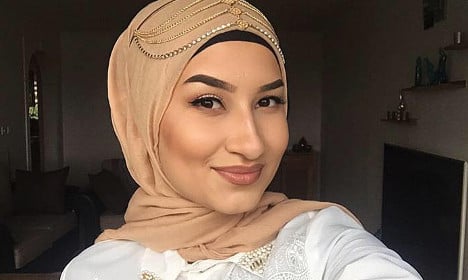 Gothenburg resident Ruya El Hattawi, who says she was denied a job because of her veil. Photo: Private

Ruya El Hattawi said she was left speechless when a recruitment agency phoned her to tell her she would not be given a job that she had previously been offered because her veil went against the employer’s hygiene policy.

The 20-year-old was interviewed for a position at a factory run by Swedish spice and condiment giant Santa Maria a few weeks ago. The conversation was filmed by a recruitment agency and subsequently sent to the company, and the recruiter soon got in touch with her to tell her they were happy and she should be ready to start the position in the second week of June.

The offer left the Gothenburg native excited to have a summer job tied up. But that feeling would soon give way to shock when she was contacted by the recruiter once more

“A few weeks later I received another call from the recruitment agency, who said they had a bit of bad news,” she told The Local. “Santa Maria had double checked their hygiene policy and therefore couldn’t employ me.”

In an effort to compromise, the biomedical analysis student offered to wear a hairnet over her veil or a special veil for the workplace. She alleges that the recruiter instead asked her to remove her veil during work hours.

“I was totally speechless. I asked the person on the phone to repeat what she said, then told her I wasn’t going to throw away my identity to work in the factory,” she explained. “That’s where the conversation ended”.

A Santa Maria representative told The Local that they have no rule banning the wearing of a veil in their factories, and that the issue was down to a communication problem between them and the recruitment agency.

“We have a rule that clothing should pose no risk to safety and that hair should be covered, which a veil of course does very effectively,” explained Eva Berglie, head of communication at Santa Maria.

“This was a premature decision down to a lack of communication between us and the recruitment agency. This kind of thing isn’t allowed,” she added.

But the incident has left El Hattawi doubting how tolerant Swedish society is.

“It was the first time it happened to me. I’m a proud Swedish citizen and everyone who knows me knows that, but in the days after the conversation I doubted myself. I felt displaced and not at home anymore,” she admitted.

“I know many people that don’t go to job interviews because they’re worried about the reaction they’ll get. Before it happened to me I was skeptical. I heard storied of people being denied a job because of their veil and thought it’s probably another reason, but that phone conversation was like a slap in the face.”

More positive however was the outpouring of support that the student received from the general public after the details of her story emerged.

“There are more people who want to help and support us than there are those that want to get us away from society. I noticed that after articles were written about me,” she said. “I got so many nice messages saying I shouldn’t give up and I should keep my head held high. The negative comments were outweighed by all the positive ones, I’m eternally grateful for that.”

“I’m not going to allow discrimination about the veil to be normalized,” she insisted. “But I also won’t stop being a proud Swedish citizen.”

Santa Maria's spokesperson explained to The Local that the company had been in touch with El Hattawi to apologize for the incident, and had offered her the chance to take the position at the company's factory.

“We of course understand that she needs to think about it, but hope that she will come and work with us,” Berglie concluded.