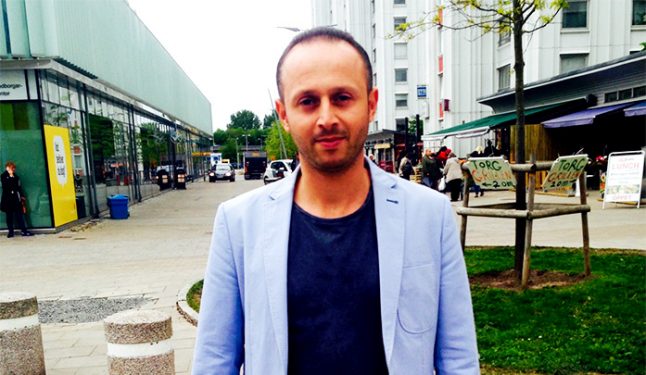 Back in Raqqa, Solaiman knew what he wanted to do. Armed with an undergraduate degree, he headed to Damascus University to get his master’s in international law.

But the war shut his course down and he decided to leave the Syrian capital. Going back home wasn’t an option — Raqqa is Syria’s foremost Isis stronghold — and so he packed his bags and made his way to Turkey.

That was back in December 2013. Less than a month later, he arrived in Sweden.

What to do? Where to live? How to speak?

Solaiman enrolled in a Swedish for Immigrants (SFI) course in Gothenburg, and boosted his learning extra classes in English and Swedish as a second language. After a year his Swedish was good enough to begin a feverish hunt for work.

“I applied for many jobs in different places.”

But with no luck, which perhaps shouldn’t come as any surprise. Competition for employment and internships is fierce: new numbers show that fewer than 500 of the 163,000 asylum seekers who arrived in Sweden last year have so far managed to land jobs.

Housing was another headache, as is also the case for countless other newcomers, but through a friend he came into contact with “a very gentle Swede” — Bertil Oresten was able to help out on both fronts.

“He rented me a room in his apartment and employed me in his company, FM Konsulterna AB, where I worked as an office assistant.”

This work kept him afloat as he pursued other options. After the first six-month contract lapsed and he had still not found anything else, his position was extended for another half-year.

How to start a new job at exactly the wrong time

A couple of months into his second term he changed tack and instead signed up for a course aimed at IT technicians. It wasn’t law, but he had worked extensively with IT back in Syria and thought this a more realistic early career path in Sweden.

“I formed an awareness that it would take a long time before I could work as a lawyer in Sweden, maybe four years or so.”

He completed the IT course in March this year, but still couldn’t find a job.

“I had no money to make a living and I needed to help my parents in Turkey. I just can’t live without working, so I knocked on many doors until I got work with Uber.”

Solaiman borrowed money from a friend to buy a car and soon he was driving with UberPOP. But fate wasn’t on his side: Just 18 days after he started working, he got a message from Uber saying it was scrapping the controversial service in Sweden.

He sold the car, making a hefty loss in the process, and the hunt was back on.

Solaiman believes that if Sweden is to successfully integrate all the people it has taken in, the country needs to get a lot better at attesting and verifying foreign degrees and qualifications.

“I speak better Swedish than my contact person at the employment office. Whenever I meet him, I feel the need to correct his Swedish.”

But that counts for little if his work experience and qualifications aren’t recognized?

“Now I just feel like my skills are frozen, or worse, in reverse. To use a Syrian proverb, getting a job in Sweden is like breaking rocks with a spade.”

For the next three months he’ll be busy with an IT-related internships, and he is sending out job applications all the time.

“But I’m really not sure when or how I’ll get anything.”