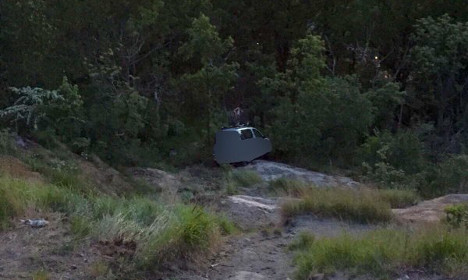 Never forget to put the handbrake on. Photo: YB Södermalm

The pair were getting intimate in a vehicle parked on Tantoberget hill on the capital's Södermalm island when it suddenly started to roll down the mound, eventually crashing into a tree at the bottom. In the heat of the moment the duo had forgotten to put the handbrake on.

An elderly woman who saw the incident from her balcony soon raised the alarm. Fortunately there were no injuries other than damaged pride. The car, on the other hand, was less lucky.

The local police even tweeted a picture of the unfortunate car in question from their official Twitter account, showing it crashed at the bottom of the hill along with the caption: “On Tantoberget a couple’s love for one another became so great they forgot the handbrake. Safety first. On all levels.”

The tweet prompted a number of humorous replies from the account's followers.

One Twitter user warned “There are many kinds of unsafe sex. Sex on a precipice is one of them”.

“He’s maybe taking their relationship up a gear,” speculated another, while a third asked “I wonder what their response was when they were asked to explain it?”

Perhaps next time the couple will stay at home.