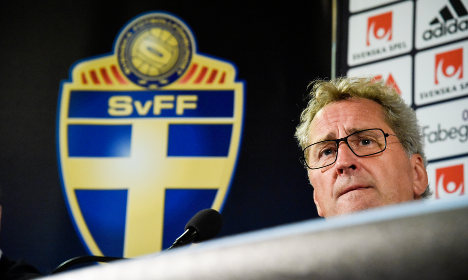 Many of the 17,000 crowd had come to see local star Ibrahimovic in action, but instead saw a pedestrian display against a team who did not qualify for Euro 2016.

Ibrahimovic sat out the game to rest a sore calf with coach Erik Hamrén given plenty to think about ahead of Tuesday's final team announcement for the European championships which get under way in France on June 10th. Ibrahimovic's enjoying not being part of this mess. Photo: Janerik Henriksson/TT

Bordeaux forward Isaac Kiese Thelin, coming off a season hampered by injuries, lacked pace with two clear chances going astray – the first following a slip-up by the Slovenian defence before the break and the second off a John Guidetti cross after 50 minutes.

Celta Vigo striker Guidetti, however, looks assured of his place in the Euro 2016 squad after leading from the front, but he too missed two chances after 58 minutes and 64 minutes. Benfica's Victor Lindelöf, 21, stamped his mark on defence for just his third call-up, while Olympiakos winger Jimmy Durmaz was also solid and could benefit as midfielder Albin Ekdal's recovers after cutting his back falling on a glass table, with Oscar Lewicki also recovering from a groin injury.

The Slovenian goalkeeper was hardly pushed by the Scandinavians, although he was at full stretch to keep out a fine shot from substitute Marcus Rohden on 84 minutes.

Sweden play Wales in Solna, north of Stockholm, on June 5th in their final warm-up game before taking on Republic of Ireland at Paris' Stade de France in their first European championship match on June 13th. The Swedes also face Belgium and Italy in Group E.