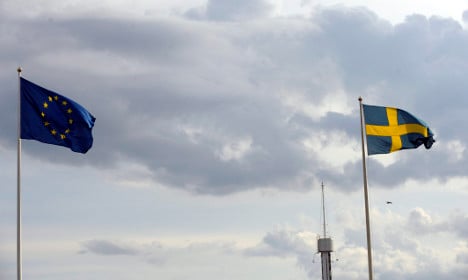 Sweden has been ranked as the EU's most competitive economy. Photo: Janerik Henriksson/TT

The 2016 edition of the IMD World Competitiveness rankings shows that only Singapore, the USA, Switzerland and China Hong Kong have a more competitive economy than the Swedes, while no nation within the EU currently fares better.

Particularly impressive was non-EU member Switzerland's position, with the country of only eight million residents placing second in the table, making it the most competitive in Europe. China Hong Kong claimed top spot meanwhile, leapfrogging the USA which dropped from first to third after leading for three successive years.

“The common pattern among all the countries in the top-20 is their focus on business-friendly regulation, physical and intangible infrastructure and inclusive institution,” said IMD World Competitiveness Center director Arturo Bris in a statement.

In western Europe the ongoing post-financial crisis recovery of the public sector was also highlighted as a key driver of improvement.

The Lausanne-based IMD has published its prestigious rankings every year since 1989, which it claims are widely regarded as the foremost annual assessment of the competitiveness of countries.

Each ranking is based on the analysis of over 340 criteria derived from the four principal factors of economic performance, government efficiency, business efficiency and infrastructure.

Also taken into consideration are responses from a survey of more than 5,400 business executives, who are asked to assess the situation in their home countries.

The return to the number five spot in 2016 is a boost to Sweden, which last year dropped four places from fifth to ninth in the table, with the slip attributed to a relatively high unemployment rate and high taxes.

Sweden ranked comfortably higher in the 2016 competitiveness rankings than European giants like Germany (12th) and the United Kingdom (18th), a further example of its ability to punch above its weight, following on from Statistics Sweden's release of new figures that show the smaller nation's GDP is growing at a greater rate than larger European counterparts.