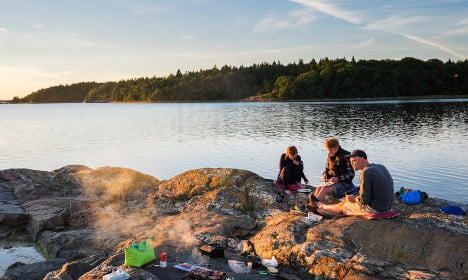 Anyone for a picnic in Stockholm's archipelago? Photo: Simon Paulin/imagebank.sweden.se

1. Get caught up in Abba fever

Abba legend Björn Ulvaeus has translated his newest project, Mamma Mia! The Party, into English for all international tourists in Stockholm this summer. The combined Greek restaurant, stage show and party venue first opened for business earlier this year. The English version runs from July 27th to August 21st and if you're an Abba fan you would do well to snap up tickets quickly; they are going like ouzo on a hot day. But be warned: The Local got a preview of the show in English during Eurovision Song Contest week and has not been able to stop humming Waterloo since.

Getting here: We recommend catching the ferry from Slussen to Allmänna Gränd, Djurgården Expressing your feelings through an Abba song. Photo: Mats Backer/MammaMiaTheParty

Ven is a small island nestled between Sweden and Denmark in the Öresund strait. It is off the beaten track to most international tourists – and even to many Swedes – but a few hundred people live there year-round and it is easily accessible by ferry from Landskrona in southern Sweden. So what should you do there? Most people rent bicycles on the island (there's a huge rental place just by the ferry terminal) and spend the day pedalling between the cafés, beaches and the museum dedicated to astronomist Tycho Brahe.

Getting here: Ferry from Landskrona, which can be reached by car, bus or train from Malmö. The island of Ven. Photo: Bjaglin/Flickr

3. Dance at a summer festival

Those long summer nights in Sweden when the sun never sets are ideal for dancing all night long at music festivals. And Sweden's got some great ones. Way Out West, from August 11th-13th, for all music fans, has such a good reputation that there's a special festival train running from the capital to Gothenburg on its opening day, for all those Stockholmers wanting to enjoy the west coast's more relaxed attitude to life. Malmöfestivalen in southern Sweden, August 12th-19th, is another The Local favourite, where visitors can listen to music, sample international food from one of the many food trucks and just enjoy the great vibe. Or why not head north to Storsjöyran, July 29th-30th, one of Sweden's oldest festivals, tracing its lineage to 1963.

Getting here: Both Gothenburg and Malmö have international airports and central train station. Storsjöyran is held in Östersund, which can be reached by train, bus or air from Stockholm. You haven't truly lived in Sweden until you've danced the frog dance on Midsummer's Eve, while sipping an aquavit and forcing that pickled herring down your throat. That's an old Swedish saying. For an extra traditional experience, travel to the Dalarna region, but there will be celebrations in every little village and town you can think of. Think maypoles, strawberries and lots of laughter (from the Swedes when you do the frog dance). If you know any Swedes, now is a great time to invite yourself over to their 'sommarstuga'.

Getting here: Just go outside in Sweden and follow the sound of drinking songs. Let's pretend this is not awkward at all. Photo: Carolina Romare/imagebank.sweden.se

5. Go for a hike in the midnight sun

The sun doesn't set in northern Sweden for two months during summer, giving you several hours more to enjoy everything it has to offer. Combine the so-called midnight sun with a hike in Sweden's mountains when they are not snow-filled. The Local's northern corresponden Paul Connolly has previously recommended the 81 kilometre stretch of the Kungsleden hiking trail, which takes you along a stunning and peaceful route on the edge of Sarek national park – often referred to as Western Europe's last wilderness. The real daredevils among you, however, may want to see if you can conquer Sweden's highest peak.

Getting here: For Kungsleden, most people start at Abisko, which can be reached by car or bus from Kiruna. For Kebnekaise, take the bus from Kiruna to Nikkaluokta. The two hikes can be combined. 6. Go to a Nordic Noir festival

Who hasn't wanted to pen their own Scandi crime drama, replicating the successes of fictional detectives Kurt Wallander and Saga Norén? The Crimetime Gotland festival is almost as good. As if picturesque Baltic Sea island Gotland wasn't wonderful enough as it is, it gets even better from August 17th-20th when more than 60 international and Swedish authors descend on Visby, including True Detective author Nic Pizzolatto and Swedish Nordic Noir queen Camilla Läckberg.

Getting here: Ferry from Nynäshamn or Oskarshamn to Visby, or fly to Visby airport from Stockholm. If Visby doesn't inspire authors, what will? Photo: Emelie Asplund/imagebank.sweden.se