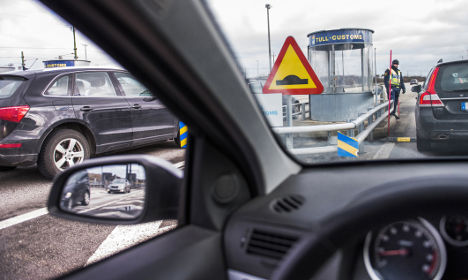 Police check identification at the Swedish side of the Öresund bridge. Photo: Emil Langvad/TT

The controls, which were introduced in November 2015, will now run until at least November 11th of this year. Neighbouring Denmark has also opted to extend its own controls until November 12th.

Sweden put its border checks in place in the south of the country amid a record influx of migrants last year, with 163,000 asylum applications registered in 2015.

The number of people seeking asylum in Sweden has dropped significantly since its border and ID controls were introduced, with an average of fewer than 500 a week now arriving in the country, compared to almost 10,000 during the autumn.

The controls are unpopular with many residents of the region however, with regular commuters between Copenhagen and Malmö seeing their journey time increase by around 40 minutes.

“It’s a blow to the region. We know that the controls cost around one million kronor ($120,353) per day. It also hurts integration,” Southern Swedish Chamber of Commerce CEO Stephan Müchler told SVT.

Müchler, who has argued for the controls to be scrapped, also claimed that people are leaving their jobs out of frustration over the changes to their daily commute.

In May the EU approved a six-month extension of border controls in the passport-free Schengen zone after nations including Sweden and Denmark wrote to complain that the situation remained “extremely volatile” and asked for permission to keep frontier checks.

Until recently, 400 million EU citizens were able to move around freely in the Schengen zone as they wished. Tourists could also travel by land in the zone unhindered.

EU rules say that in exceptional circumstances countries may put in place border controls for a maximum of two years, for periods of up to six months at a time.