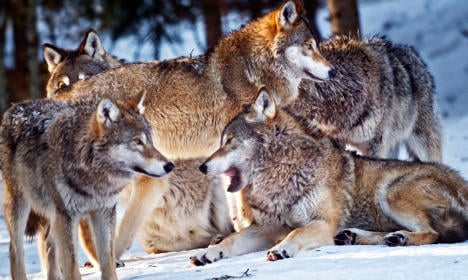 Wolves (at a zoo) in Sweden. Photo: Yvonne Åsell/SvD/TT

The figures were presented by Sweden's Environmental Protection Agency (Naturvårdsverket), which every winter counts the wildlife population to keep tabs on wolves, bears, lynxes and wolverines in the country.

It said that a licensed cull on wolves, as well as natural factors such as birth and death rates, had contributed to the falling numbers.

“In our inventory, we see that there are many [wolf] territories, but that the number of family groups has declined as a result of licensed hunting. New wolf pairs have established themselves in the old territories, but have not reproduced during the inventory period,” Naturvårdsverket analyst Maria Hörnell Willebrand said in a statement.

“Family groups have a big impact on the result, because the population calculation is based on regeneration, which is basically the same as family groups,” she added.

Sweden had been seeing a hike in the populations of bears, lynxes, wolves and wolverines – the four major predator species in the Nordic country – in recent years after a dip earlier in the millennium.

The Environmental Protection Agency has previously recommended that the wolf population be kept down through regulated hunting, a topic of heated debate in the Nordic country.

They also say that many of the wolves they killed had been in good health, which shows that the species, considered extinct in the 1970s, has made a good recovery in Sweden.

The back-and-forth battle saw Sweden resume wolf hunting in 2010 and 2011, leading to a protest by the European Commission over the country's hunting quota policy.

Norway's predator monitoring programme also presented new statistics on wild wolves on Wednesday, but instead found that they had doubled. We are no wildlife experts at The Local Sweden, but still want to throw this out there: did Sweden's 'missing' wolves just move to Norway?