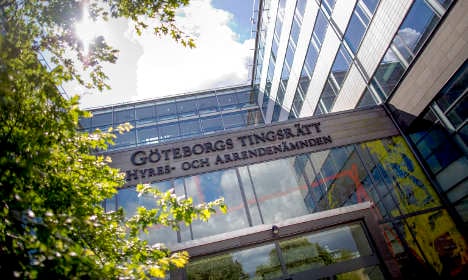 Alexandra Mezher, 22, was stabbed to death at an asylum home for young people in Mölndal last January. The incident was covered extensively in the international media, and stoked tensions in Sweden over the refugee crisis.

A young asylum seeker whose age has not been established is suspected of murdering her. He was arrested by police who arrived at the scene of the fatal knife attack.

The man is also accused of attempted murder after allegedly attacking another resident at the home who tried to restrain him. The other resident survived without serious injuries.

The alarm was raised on the morning of January 25th after 22-year-old Mezher was found with knife wounds in her thigh and back. She was taken to hospital but pronounced dead later in the day.

“Come quickly, there is a lot of blood,” emergency services were told when called to the scene by another resident of the home, news agency TT reported on the first day of the court hearing on Wednesday.

Gothenburg’s district court will attempt to establish the suspect’s age, which has been contested in the build-up to the trial. He claims to be 15, but the prosecution argues that he is not a minor, with the support of information from Sweden’s Migration Agency. If he is found to be aged 18 or over then he will be sentenced as an adult under Swedish law.

Assessments of the suspect’s mental health could also affect the sentence. According to the charge sheet the man was suicidal at the time of the murder, while staff at the centre had also alerted social services the previous day after it was discovered that he had hurt himself with a knife in his room.

Swedish tabloid Aftonbladet reports that he required 24-hour surveillance and was proving difficult for the home to take care of, leading to requests for additional staff which were not yet fulfilled when the alleged murder took place.

Questions have been raised over security in Sweden’s care sector as a result, with one trade union complaining of deteriorating safety for employees in recent years.

“There are many work places where security and staffing levels are too low,” Veronica Magnusson, chairperson of trade union Vision told news agency TT.

The trial, which is expected to last four days, will see six other residents of the home testify.