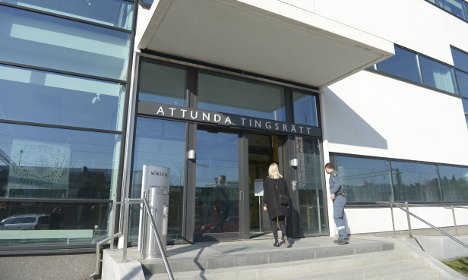 A 25-year-old man is on trial at Attunda District Court suspected of planning to travel to Syria to join the terror group al-Nusra Front, an al-Qaeda linked jihadist group which claims to be behind a series of bombings in the Middle Eastern country.

He was arrested at Stockhom's Arlanda airport on April 13th, returning from a day-trip to Turkey. According to the charges, he is suspected of intending to commit terror crimes in Syria.

He denies the charges, his defence team told the court on Thursday.

“He admits that he started a journey, but the purpose was not to commit terror crimes, but to take part in humanitarian work in Syria,” said his lawyer Henrik Olsson Lilja.

The prosecutor is expected to base the case on the man's Facebook conversations, text message history and internet search history.

A holster, a protective vest and other protective equipment seized by police officers are also likely to feature in the trial.

Sweden introduced new legislation on April 1st designed to crack down on jihadists. It toughens existing legislation by punishing those who travel abroad to join a terrorist group.

According to the new laws, those convicted of travelling to another country to seek training or to commit a terrorist act will be handed two-year sentences.

Sweden's intelligence service Säpo has previously identified around 300 people as having left Sweden since 2013 to join the Isis jihadist group in the Middle East. It believes 135 have since returned to Swedish soil and has said returning fighters are among the biggest threats to Sweden.