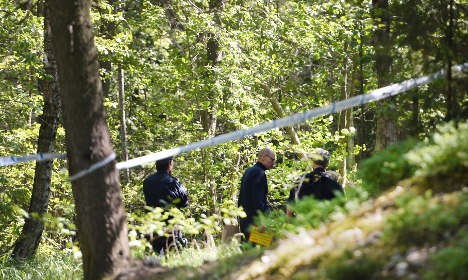 Police examining the location where the body was found. Photo: Pontus Lundahl/TT

The body was found on Monday after a dog walker spotted an arm sticking out from the moss in a forest area of the Hökarängen suburb of the Swedish capital.

Police launched a murder investigation after forensic teams found that her death may have been suspicious.

The girl has not been formally identified, but several Swedish newspapers reported on Thursday afternoon that she is understood to be a 16-year-old asylum seeker.

The Dagens Nyheter (DN) newspaper wrote that the girl, from Afghanistan, was reported missing by her boyfriend and the refugee home where she was staying on March 20th.

According to unnamed sources cited by the Swedish daily, police are investigating a theory that there could be an “honour motive” behind her suspected murder.

“We have been told by the police not to talk to anyone about what has happened,” a worker at the asylum home where the young girl was staying told the Aftonbladet tabloid.

Police lead investigator Daniel Edlund and prosecutor Tomas Malmenby both declined to comment during the ongoing investigation when approached by DN.

No one had been arrested by Thursday afternoon.

Sweden took in more than 35,000 underage asylum seekers arriving in the country without their parents in 2015, around 23,000 of whom came from Afghanistan.