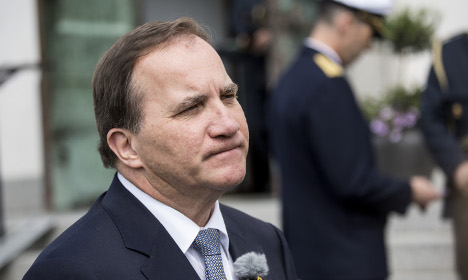 An honest but sad man, according to some. Photo: Christine Olsson/TT

A survey carried out by Aftonbladet/Inizio suggests Swedes don’t think much of Löfven’s capacity to charm. Of the 1,032 participants polled, only fifteen percent said he was humorous and creative, while 12 percent said that he was inspiring.

All three categories saw a minor change from the last time the questions were asked in March. But with only a three-point increase in the number of responses saying he was humorous and creative, and a mere one percentage point more praising his capacity to inspire, Löfven is still struggling to stimulate Swedish citizens.

Only a quarter of responses said he was statesmanlike, while even less (23 percent) praised his capacity to make decisions.

Aftonbladet summed the results up by saying Löfven is perceived as being a “sad man without many ideas”.

There were some positives for the Social Democrat leader however. The poll suggests many Swedes trust him, with his highest-ranking qualities in the survey being his honesty (41 percent) and his commitment (41 percent).

Löfven has experienced a tough 20 months in government, his time in office coinciding with the major challenge of the refugee crisis. Sweden took in more than 160,000 asylum seekers in 2015, putting it among the EU states with the highest proportion of refugees per capita. That led to the divisive decision to introduce border controls in November 2015, which have just been extended until late this year.

Löfven has also had to live with a crisis among his junior partners in government, the Swedish Greens. A series of scandals in quick succession led to their leader and then Deputy Prime Minister Åsa Romson stepping down on May 9th, sparking a cabinet reshuffle from the PM later in the month.