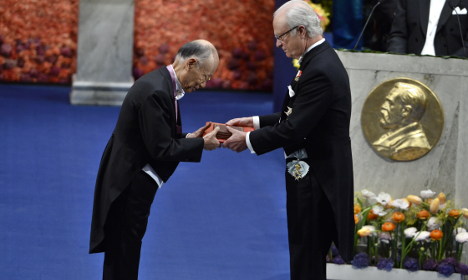 Some say it is an inspiring architectural project bringing Sweden's famous Nobel Awards into the modern era. Others call it an eyesore. The so-called Nobel Center, a billion-kronor hub to be built in central Stockholm by the Nobel Foundation, is the latest project to cause a stir in the capital.

The huge construction initiative was voted through by councillors in April and is expected to go ahead as planned. But its critics have slammed a decision to tear down an historical 19th-century toll house on Blasieholmen island to make way for the large stone and glass facade building.

They have now been backed by a pair of unlikely activists: King Carl XVI Gustaf and Queen Silvia.

“Nobel is a name that we want to protect, of course. We want to preserve and increase its value. And the purpose is laudable, but that the building has become so big and has ended up a little bit in the wrong place is a shame. And it's very sad that the debate has been so animated,” the King said in an interview with the Dagens Nyheter (DN) newspaper.

The King, who has his offices in the Royal Palace in Stockholm's Old Town, will be able to look out through his window and gaze at the new Nobel Center when the work is finished. And it seems the Swedish Royal does not want another building to outshine his workplace.

“It does not have to be so gigantic, of this huge volume. You could downsize and turn it in different directions. And why get bogged down in the trenches and say that it should be in this exact location? You could move it,” he said.

“Why not have a referendum,” suggested the Queen. The new Nobel Center is expected to house all the Nobel Foundation's activities, including the annual internationally famous ceremony where the King himself hands out the Nobel Prize to all the laureates.

It will also be home to a library, several conference rooms and educational space for school visits.

Building work is set to start in 2017. However, the decision has been appealed by various organizations, which means the debate is likely to continue. But Stockholm councillor Roger Mogert, one of the main proponents of the project, said the King's opinion would not be heeded.

“No, he's one hundred years too late. He is entitled to have an opinion on aesthetics, but Sweden has been a democracy since 1919,” he told DN. “It feels absurd to, in the year 2016, respond to questions about what the Royal Family wants.”

It is not the first time King Carl XVI Gustaf grabs headlines for his opinions about everything from architecture to environmentalism. Earlier this year he advised people to cut down on red meat as well as jelly sweets. The year before he suggested a global ban on bathtubs.