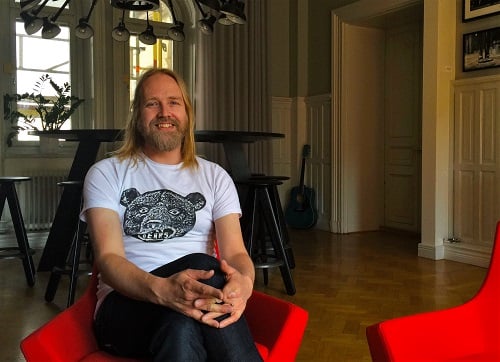 Ola Broquist looks simultaneously out of place and at-home in the offices of Luger in central Stockholm.

“Do you want coffee? Ice cream?” he asks as he walks up the red-velvet stairs.

Eccentric black light fixtures and full-length windows adorn the large meeting room, and Ola slumps down comfortably onto a vibrant red armchair in his blue jeans and t-shirt.

With his long blond hair and beard and his merry blue eyes, Ola could easily be mistaken for a “typical” punk-rock Viking Swede.

But as one of the founders of booking agency Luger, he’s also arguably one of the most influential players in the Swedish music scene.

“Basically we wanted good music and artists there, and we didn’t have concerts. So we put on our own.”

All was well until they outgrew their tiny venues and wanted to expand the operation.

“We kind of clashed with the city. They weren’t putting any effort into this area. So we decided to start booking artists to other cities instead, as revenge,” Ola chuckles.

The trio started booking artists for concerts in bigger cities, and organizing tours throughout Sweden. And from there it just grew and grew.

Today Luger represents more than 120 Swedish artists, promotes foreign artists in Sweden, and is also the organizer behind some of Sweden’s biggest music festivals, such as Way Out West (Sweden's largest music festival), Popaganda, and Stockholm Music & Arts.

But the concept, Ola says, is still quite simple.

”We only work with artists we like,” he explains. “Artists who have awesome music, or maybe who are simply awesome people. It’s quite a luxury, being able to work that way.”

The company represents Elliphant, Icona Pop, First Aid Kit, and Mapei just to name a few. But it has also been responsible for bringing big names such as Alicia Keys, Florence + the Machine, Tori Amos, and Prince to Swedish festival stages.

But the guys at Luger don’t just focus on what they like. Their dream is that the festival scene has something for everyone.

”20 years ago, ’festival’ was synonymous with youth, alcohol, and dirty camping in the countryside,” Ola remarks. “That kind of festival still exists of course – but it doesn’t have to be that way. Now there are many possibilities.”

Luger has been part of the transformation in Sweden, for example with their festival Stockholm Music & Arts, which takes place on the island of Skeppsholmen in late summer each year.

The festival hosts artists from a variety of genres, famous and obscure. It’s not just about music but also works with Moderna Museet to get art involved. And there’s no camping – visitors attend the festival and then leave.

When asked if the goal of the festival was to keep things, well, cleaner, Ola laughs.

“Not clean, no. But…accessible. We think that music should be accessible for everyone. It shouldn’t be a problem or a pain in the ass to go to a festival if you’re 52 and like Björk. Same if you’re 19 and like ‘older’ music. It should be easy and fun to attend. The audience should be diverse.”

It’s just one of several areas where Luger is making a difference – and while Ola says he doesn’t like to toot his own horn, he admits that the company has a large platform, one that can be used to promote positive changes.

”We made Way Out West a vegetarian festival, for example, and that got lots of attention,” he explains. “What we do one weekend in August doesn’t actually play such a big role, but it sparked discussion and debate all year long. We shouldn’t underestimate our ability to be a positive influence.”

Starting this year the Popaganda festival will be vegetarian as well, and Ola says that Music & Arts is something like “60 percent vegetarian”.

“I’m not saying all festivals have to be vegetarian,” he adds. “But if we can inspire those who always eat meat to eat vegetarian just once a week for the rest of the year – well, that’s worth something.”

And then there’s that little issue of gender equality – not so little in Sweden.

”We work as hard as we can to always have an equal line-up,” Ola states. “It’s a big deal here – and I dare say Sweden is best in the world when it comes to gender-equal festivals.”

While there is still work to be done, Ola says it’s easier for female artists to break onto the music scene in Sweden than in many other countries.

“There are fewer road blocks,” he says. “We have a lot of strong, talented female artists.”

When booking international artists for festivals, though, he says different perspectives on gender equality can lead to culture clash.

“When you tell an English or American agent, ‘Hey, this matters,’ they’re just like, ‘What?’ Many of them have never even considered the issue. They try to push yet another male artist and we say no, but sometimes people think we’re crazy,” he laughs. “But it’s only a matter of time, I think, until it’s on everyone’s agenda.”

The future of festivals

So what’s next for the live music scene, in a country that has given the world both Pirate Bay and Spotify? Will the festival craze last?

And in an era when almost all music is streamed, concerts are more important than ever, he adds.

”The whole concert experience is very hard to replace,” he says. “You can take away the CD – that doesn’t matter. But concerts – that moment of contact between the artist and the music – that’s essential. And it’s become more important for artists economically as well.”

And if against all odds people should prefer streaming concerts to actually attending…well, he’s not worried about that either.