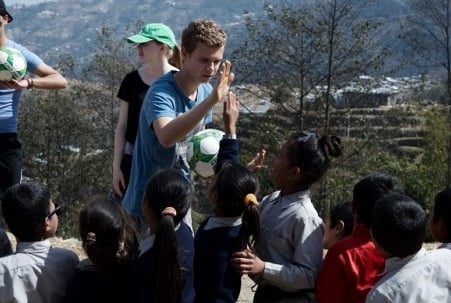 “One of the best things about my school is that it teaches you to be a global citizen, and the Nepal Project takes this to a new level.”

These words from a student summed up Stockholm International School’s Nepal Project, the largest service endeavour the school has ever undertaken.

Since launching the partnership with a Nepalese primary school in 2014, the student-led team of ten has raised funds to help the 60 Nepalese students, with an annual springtime trip allowing them to oversee the changes as they are put into practice. The school’s community is truly global – SIS offers an international education from preschool to grade 12, with students from over 60 countries – and now its students are working to ensure they have a positive impact on a global scale.

At the Nepal Celebration on Tuesday, the students behind the project spoke enthusiastically about its goals and progress, as well as sharing a video of their unforgettable trip.

As the audience of students, parents, and other interested members of the SIS community arrived at the school auditorium, they were treated to Nepalese food, while two members of the student team applied traditional bindis to the guests’ foreheads. Project Ambassador and tenth-grader Julia Vestberg, who was dressed in a Nepalese sari, began by explaining the project’s aims.

Inspired by the United Nations’ 17-point action plan for a world without poverty or social inequality, the team have chosen to focus on five of the goals in particular: no poverty, no hunger, quality education, sustainable cities and communities, and strength and partnership.

These goals are put into practice both throughout the year at fundraising events, and during a week-long trip to Nepal, during which ten students from grades nine to 11, led by Project Ambassadors Krešìmir Krajnovìć, Julia Vestberg and Hallie Marcellus, visited the Shila Devi primary school.

Jill Limacher spoke about her experience of the trip and showed a video of the SIS students at the school.

The team from SIS arrived in Nepal in March 2016 with 12 bags of donations, providing each Nepalese student with toiletries, a toy and other basic items. Last year a student had personally organized a shoe drive, after discovering that many of the Nepal students walk for over an hour to get to school – some even carrying younger siblings on their backs. This year Julia organized a drive for toiletries. Read more about The Nepal Project

But as Jill explained, the aim of the project is not merely to provide financial aid, but “to support the Nepalese community by building personal and meaningful connections”. The SIS team connected with the Nepalese students, teaching sports and games as well as basic health and hygiene.

Students Giordan Yates and Sebastian de Paz spoke about the support SIS offers Shila Devi, and how they raise the funds to achieve it. Since the first Nepal trip in 2015, the students have worked hard to raise awareness in the school community about the project, and to collect donations which will make a real difference to life in the Shila Devi school. While the trip is crucial in allowing the team to build connections, most of the Nepal Group’s work is done here in Sweden throughout the year – and the whole SIS family gets involved.

The Student Chairman of the project, 11th-grader Krešìmir Krajnovìć, who has now been to Nepal twice, said: “The Nepal Project has been such a success because so many different people worked really hard. All the members of the team are crucial.We have built it up to become one of the defining points of our school.”

The aim of the project now is to continue as a long-term sustainable effort, continuing to provide the Nepalese students with daily lunches, shoes and uniforms – a legal requirement in Nepal – as well as making new investments in infrastructure and educational materials.

SIS has provided the school with solar panels, allowing the school to produce its own electricity, and is now looking into options for improving access to clean drinking water.

This is all made possible by students and parents coming together for fundraising events, which this year included three large events; a Fit For Nepal week, a Global Citizen walk, and a concert by the school band.

Regular Friday meetings allow anyone in the SIS community to contribute ideas and get involved, and the team make sure the whole school community is kept up to date with their work, so that everyone at SIS feels close to the project. Furthermore, there is total transparency about what is done with the money raised, allowing students and parents to see the tangible difference they have made possible.

The involvement of the entire school was something which Krešìmir also emphasized.

“For those of us who worked on the Nepal Project, it was really important that the whole community – students, parents and staff – were aware of what we were doing so that they have an understanding and feel a connection to the project,” he said. “Very few schools have anything like this.”

He added that the project hasa positive impact on students from both schools and is truly symbiotic.

“The students in Nepal get material help but at SIS, we get the benefit of understanding this other culture,” he said.

“Those who go to Nepal get to travel, learn about a different culture and be involved in a service project which reflects UN global citizen goals. The highlight of the project is knowing – and seeing – that all your effort has a real world impact.”

This article was produced by The Local and sponsored by Stockholm International School.