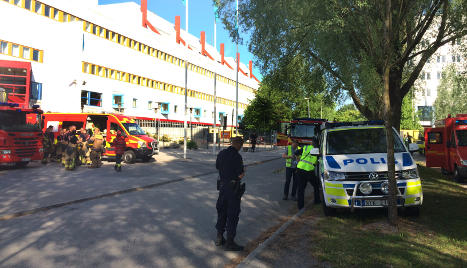 The alarm at the centre in Årsta was raised at 5.38am on Friday morning, after the letter with white powder in it appeared in the mail sorting.

Emergency services were called and arrived quickly at the scene. The potentially contaminated area was isolated within an hour.

“We don’t believe anyone is injured or sick,” Stockholm police press spokesperson Hesam Akbari told The Local. “The emergency decontamination unit decontaminated six people a few hours ago, while 20 more were showered off,” he added.

The six individuals that were decontaminated have been taken to hospital in accordance with standard police procedures.

Police are awaiting the results of an analysis to find out what substance or substances the powder is comprised of.

An additional suspicious package that was found in the mail centre is also under investigation.

“It wasn’t just one letter. There is another which is under investigation,” Akbari explained.

The incident in Stockholm occurred only hours after an unknown substance was found inside a letter in the mail distribution centre in Stokke, Norway on Thursday night. Fourteen postal workers there were sent to hospital as a result, while another 30 were admitted for check-ups.

The powder in Norway has since turned out to be harmless flour, but Norwegian police stressed that they are continuing to investigate the origins of the envelope.

And Stockholm Police told The Local earlier in the day that they haven’t ruled out a connection between the two events.

“We haven’t ruled anything out yet, the investigation is still ongoing. We’ll see how it progresses over the course of the day,”  spokesperson Akbari concluded.