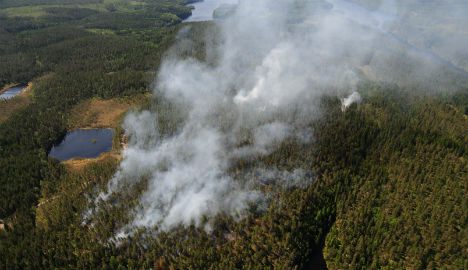 The forest fire was brought under control by Saturday afternoon: Photo: Bengtsfors Rescue Service
The blazes, the first of which was first spotted early on Saturday morning by a Norwegian fire monitoring aircraft, was still being surveyed by helicopter early on Saturday afternoon.
“The outer edges have been put out, but it's still flaring up in the affected area,” Anders Olsson, the head of the rescue services in Bengtsfors told TT newswire. “Where it's burning with an open flame, we have the fire front under control.”
According to police, around 50 hectares of forest had already been destroyed by 11am, although fortunately no houses or buildings had been affected.
“According to the information I have, no buildings are either damaged or at risk, right now, in any case,”  police spokesman Hans Lippens said.
By 1pm, fire services had discovered four separate fires, three in Bengtsfors and a fourth in nearby Dals-Ed.
Olsson said that the fires had most likely been caused by lightening strikes during storms which hit the area on Friday night.
Swedish police said that they were waiting for Norwegian fire services to send a fire helicopter to drop water on the blaze.
In the summer of 2014, a fire in Västmanland, a rural area of central Sweden, ravaged 14,000 hectares of woodland, after emergency services took too long to arrive at the scene. The fire killed one person and injured two.