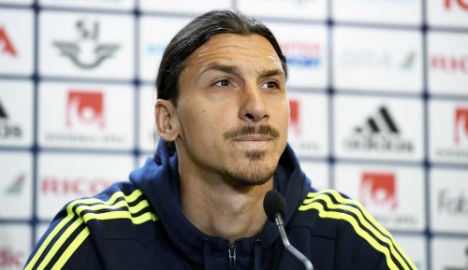 Zlatan Ibrahimovic at the start of the Swedish team's Euro 2016 training camp . Photo: Janerik Henrikson/TT
According to the British broadcaster, Manchester United’s vice chairman Ed Woodward is in the final stages of tying up the one-year contract, with manager Jose Mourinho determined to make the Malmö-born striker his first signing since joining the club.
Sky Sports tweeted out the news at around 10pm UK time on Friday.

In his most recent interview on Friday evening, Ibrahimovic had also hinted that an announcement was imminent.
“It’s secret. All will soon be revealed,” he told the Swedish Football Association’s new app Blågult Inifrån.
The Sky story, by respected football reporter Andy Burton was given additional credence by a follow-up story in the UK's Guardian newspaper.
The Guardian reported that Ibrahimovic's agent Mino Raiola had already reached a deal with Manchester over the striker's salary, leaving only a verbal agreement between Ibrahimovic and Mourinho over his role at the team to clinch the deal.
According to the newspaper, the 1.95m tall player fears becoming a back-up striker as he comes close to the end of his career.
Raiola had denied as recently as last week that his client was headed to Old Trafford.
“We have not decided anything yet. I think it will be a surprise in the end. Everyone is harping on about only United, United, United,” he told Expressen newspaper.
Ibrahimovic “will pull a surprise,” Raiola said, adding “it’s not true he’s going to Manchester United.”
After Sky Sports broke its story on Friday night, it was downplayed by Tancredi Palmeri, the well-connected Italian football journalist.

Ibrahimovic earlier rejected a reported £26m-a-season deal to play in China, and has also been wooed by Qatar’s Al-Sadd, Los Angeles Galaxy, and his old Italian club, Inter Milan.
But Sky Sports reported that he now wanted to make the British Premier League the final arena for an illustrious career which has already seen him compete in the Dutch Eredivisie, the Italian Serie A, the Spanish La Liga, and, most recently, the French Ligue 1.
British tabloid newspaper The Mirror last week reported that Manchester United had agreed to meet the Swede’s salary demands of £250,000 a week.