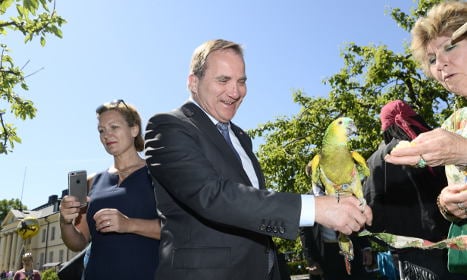 Who's a pretty boy, then? Löfven wandering the grounds after his speech to mark Swedish National Day in Hågelbyparken in Botkyrka to the south of Stockholm. Photo: TT

“I've been lucky and I know that there are few other countries in the world where I would have had the opportunities I’ve had here,” Löfven said, during his speech in Hågelbyparken in Botkyrka to the south of Stockholm, in conjunction with the Swedish National Day celebrations.

“To empathize with a stranger, that is how we build the Swedish model. It is based on that we do our duty and on hard work,” he said.

Löfven also talked about using the engine of economic growth to bolster Sweden’s cohesion and solidarity.

“Growth is strong now. But it must be used to strengthen cohesion and solidarity.”

“Our society should never be characterized by stone throwing.”

“All should be able to proudly say, ‘yes, I come from Sweden, it is the land I love,” said Löfven.

The Swedish prime minister has endured a testing time recently.

A poll in the Swedish newspaper Aftonbladet found that only a quarter of those polled said he was statesmanlike, while even fewer (23 percent) praised his capacity to make decisions.

Aftonbladet summed the results up by saying Löfven is perceived as being a “sad man without many ideas”.

Löfven has also had to live with a crisis among his junior partners in government, the Swedish Greens.

A series of scandals in quick succession led to their leader and then Deputy Prime Minister Åsa Romson stepping down on May 9th, sparking a cabinet reshuffle from the PM later in the month.