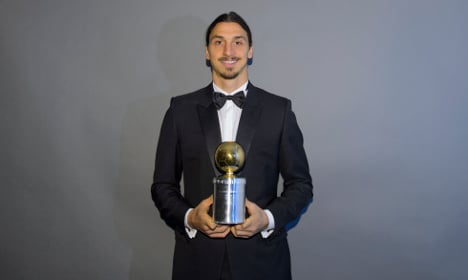 Ibrahimovic with his tenth Swedish footballer of the year trophy in 2015. Photo: TT

Yesterday, against Wales in Sweden's last friendly before Euro 2016 kicks off later this week, Ibrahimovic gave a regal performance in the 3-0 Swedish win.

However, Ibrahimovic pulled on his boots for the first time at the age of six at Fotbollsklubb (FBK) Balkan, a club created by Yugoslav immigrants in Malmo in 1962.

“The only thing he wanted was to score goals, so sometimes he listened to the coaches but sometimes he just did what he wanted,” said Ivan Milosevic, the FBK Balkan president. He played with Ibrahimovic when they were young and now trains the senior side.

A former FBK Balkan coach Hasib Klicic has similar memories. He remembered Ibrahimovic as “a troublemaker. Not very good but he always wanted to play.”

“He was good but not 'wow what's happening here'… He was a little bit slow when he started but the finish was good!” recalled his coach at Malmö, Ola Gallstad, where Ibrahimovic went in 1994.

The stubbornly single-minded perseverance was the key to Ibrahimovic's success.

And the powerful striker likes to trumpet it. “I came like a king, left like a legend,” the 34-year-old Swede said as he confirmed last month that he would be leaving Paris Saint-Germain where he spent four years winning trophies and breaking scoring records.

“He always had a ball. I think he even slept with one. He was never without one,” added Klicic. “He and a friend fought to score the most.”

Some FBK Balkan members say Zlatan has forgotten the team since becoming a star. But Milosevic avoids that debate. He prefers to remember a very determined player.

The club president presses the message to young players that if Ibrahimovic can do it, so can they.

FBK Balkan is based in the working-class Rosengard district of Malmö. The flamboyant Ibrahimovic seems omnipresent. He rarely goes to the town of red brick apartment buildings now, but his unmistakeable grin adorns a local tunnel wall.

Young and old are quick to boast of their connections to Sweden's best known player who had a stellar career at Ajax Amsterdam, Inter Milan, Barcelona, Juventus, AC Milan and Paris St Germain.

Even at 34, Ibrahimovic will be the focal point of Sweden's team at the European Championship finals in France. He is the all-time record national scorer with 62 goals and is a 10-time winner of the national Guldbollen player of the year award.

As soon as school ends in Rosengard, kids rush out onto “Zlatan Court”, kicking the ball around a pitch he had built and which is emblazoned with the gold swoosh of his sports equipment sponsor.

“For us, it's huge to play for his first club,” said Max Skarpas Torres, a 19-year-old defender who wears the same FBK Balkan jersey that Zlatan wore, featuring the flags of Sweden and the former Socialist Federal Republic of Yugoslavia.

FBK Balkan claims to be the oldest club in Europe representing a diaspora, as well as Ibrahimovic's alma mater. It has had its ups and downs over the years and is now struggling, having failed to attract the migrants from the Middle East who are now a majority in Rosengard.

“On our team, for those born in 1980-1981, we all came from the former Yugoslavia,” recalled Milosevic. Born in Malmo, Sweden's third city, Ibrahimovic has a mother of Croatian origin and a Bosnian father.

“If you really want it and give it all you've got, there's a chance you could become like Zlatan Ibrahimovic,” said 24-year-old player Dino Dulji.

For kids in this neighbourhood, where unemployment is high, Ibrahimovic is a role model: the son of migrants who grew up in difficult conditions and managed to make it to the top ranks of the football world.

“For the kids and youth of Malmo, he is proof that you can rise to the top echelons, that you can become someone in life,” said Ibrahim, a 26-year-old Rosengard resident.