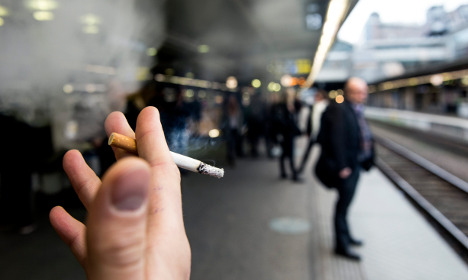 Should smoking be banned in public places? Photo: Pontus Lundahl/TT

All outdoor restaurants, cafés and bars in Sweden could become non-smoking. A government inquiry reviewing tobacco legislation to reduce the use of tobacco is currently being looked at by a long line of organizations and government agencies. Their deadline to put forward their views is July 1st. The proposal that will be put to parliament has yet to be outlined, but such a smoking ban could very well go through.

Public opinion is for a smoke-free society, according to a major survey on behalf of Cancerfonden.

People want to breathe fresh air at restaurants, both inside and outside. Staff at restaurants welcomed the decision to ban smoking in the pub, when that law came into force 11 years ago. The decision was preceded by heated debates where worried commentators predicted the death of all pubs and unemployment, but just the opposite happened. Fresh air is appreciated.

It is time to ban smoking in outdoor seating areas and some other public outdoor areas as well.

Forced smoke, so-called passive smoking, is unhealthy. There are no levels of smoke low enough to be harmless, according to the World Health Organization (WHO), which has therefore proposed legislation as the only option of getting rid of the smoke. The WHO Framework Convention of Tobacco Control, of which Sweden is a signatory, recommends zero tolerance.

A week ago it was the day of the WHO's international tobacco-free day. We don't think that there should be a blanket ban on smoking, but everyone should be able to breathe fresh air. Not having to be exposed to second-hand smoke is especially important to people with asthma or allergies and to children. The lessons learned when smoking was banned at indoor resturants and bars show that not even smokers themselves appreciate cigarette smoke when there is good food to be enjoyed.

We need legislation for some non-smoking outdoor environments, such as at entrances to public buildings, on train station platforms and bus stops, at restaurant outdoor seating areas and in outdoor stadiums.

There is strong popular support for a more restrictive tobacco legislation. Demoskop polled more than 5,300 people on behalf of Cancerfonden this spring, suggesting that three out of four people wanted measures banning smoking in public places such as playgrounds, bus stops and outdoor cafes and so on.

If more people stop smoking and more places become non-smoking, children will not find smoking role models and will not be attracted to smoking. Smoking will then be seen as unusual behaviour. It would also help those who want to quite smoking. More non-smoking places also means a smaller risk of accidents because children are in various ways harmed or injured by cigarette butts.

Those who suffer from asthma, allergies or other kinds of hyper-sensitivity enjoy the same right as everyone else to be able to hang out at outdoor bars, platforms or bus stops. Accessibility is a right. Allergy symptoms when exposed to second-hand smoke is very common. In Sweden, around ten percent of all children and adults have hay fever, which is most cases mean that you are extra sensitive to tobacco smoke.

As early as 2003, parliament set a target that from 2014 nobody would be exposed to forced second-hand smoke. This target is far from met. But there is a possibility now of making good progess in terms of a smoke-free society, accessible to all.

It is our hope that the Swedish parliament this year votes to ban smoking in those public outdoor places recommended by the government tobacco inquiry.

This is a translation of an opinion piece first published by Sydsvenskan and written by Mona Wahlgren, chairperson of Health Professionals against Tobacco in Sweden, and Maritha Sedvallson, chairperson of the Swedish Asthma and Allergy Association.