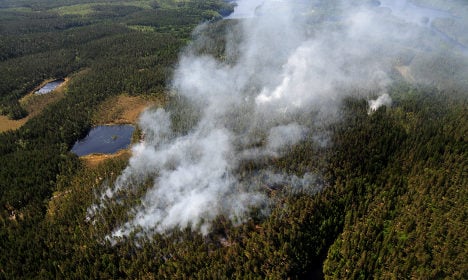 National weather institute SMHI on Tuesday warned of “an extremely great risk of” forest fires spreading in southern Sweden in the afternoon, with the threat increasing in large parts of the north-east on Wednesday.

“It's been very dry for a while now,” said Nils Holmqvist, meteorologist for public broadcaster SVT.

Sweden has experienced sizzling temperatures this summer, with the mercury soaring to 30.2C in Gothenburg on the west coast on June 3rd – the season's hottest day so far. But, while welcomed by many, the sunny days have also left the ground dry, making it vulnerable to wildfires.

Forest fires swept across central Sweden on Tuesday, including the Vrinnevi forest in Norrköping, Järpmyrberget in Ockelbo and along the railroad between Grängesberg and Ludvika in Dalarna. A fire near Lidhult in the southern Småland region which took days to put out last week flared up again at around noon. Earlier in the day firefighters were able to extinguish another blaze covering an area of 1,600 square metres near Lycksele in northern Sweden's Norrland region, which started after a tree fell onto an electric wire.

“It's going to be windy on Wednesday in large parts of Norrland with very harsh gusts of wind. If a forest fire starts it will be very hard to manage,” said Holmqvist.

The fire threat is made worse by the risk of thunderstorms on Tuesday afternoon and evening in southern and central Sweden, and parts of Norrland, according to SMHI.

“But it is best to watch out in the whole country,” said Holmqvist.